Skip to content
Home / Delve into the Depths in the Kobold Blog / Book Review: Night of the Hunter: Companions Codex, Book 1 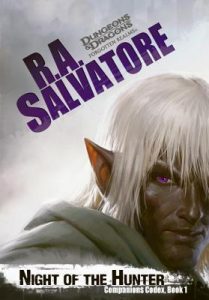 The Night of the Hunter, R.A. Salvatore

Drizzt and his reincarnated companions have had a twenty-year reunion, and they are going back to one of their old haunts: Gauntlgrym. Their goal is to rescue or destroy Bruenor’s loyal shield dwarf friend. So, you might think that this is just one major problem to handle, when, in fact, these companions have several major problems. The biggest is that Bruenor’s old friend is now a vampire. Also, a colony of drow has decided to set up shop in Gauntlgrym and, like all good drow from Drizzt’s hometown, they feel inclined to kill him on sight. If all of that isn’t bad enough, something is afoot aboveground, and Drizzt and his companions must traverse dangers above and below the surface to get to Gauntlgrym. Good times.

So, Drizzt is back, though one might argue that he never left. Drizzt is an icon, not just in the Forgotten Realms, but as a fantasy character. He serves as the template for many characters that have been and will be written. In this novel, Drizzt is running with his reincarnated friends and even a few foes from his Mithral Hall days. This is one aspect of this book that really had me conflicted.

With the Sundering shaking the Forgotten Realms, several all-star authors have written books explaining what has been happening to their beloved characters while the rest of the world moves past the Spellplague or introduced us to some new heroes. It seems like many of the established characters have been in some strange sleep and woken up years later to find a changed world. Salvatore fell into this easy-button solution for at least one of the characters in this novel. As for the rest, he mixed things up a bit. It turns out that the rest of the gang from the hall was resurrected and have had their world views changed by living their new lives in their new bodies. They were born with all of their old memories, but their new life experiences are rather different from their “old” lives. While original and well done, I still think they should have stayed dead. Salvatore’s willingness to kill off beloved characters and the way he had killed off or spread the companions to the four winds was all good to me. I think Salvatore did the right thing, in other words, before this novel: The way he handled the stories of these great characters before this point felt right. Sure, I was upset to see them go, but now they are back—and they are a little different, but not as different as I would have liked.

This book has a ton of drow intrigue, and it had me confused, which I guess is exactly what drow intrigue should do. But the web that Salvatore weaves was very close to shifting from exciting to long division. I didn’t go into this book as brushed up on drow politics as I should have been. Salvatore is a good enough writer where I never felt completely lost, but if I had re-read some of the previous books dealing with the subject, I think I would have caught on to a few more of the nuances. Even as confused as I was at times, I never felt like Salvatore was out of control—in fact the machinations would have made the Prince himself proud.

Even with my inability to catch on to some of the more subtle activities in this book, it was well written. You don’t sell as many books as Salvatore has without doing something right, and he maintains his already high standard with Night of the Hunter. The action scenes were wonderful, and Salvatore uses his extensive knowledge of the Realms to add some real spice to this book. The descriptions of the above- and belowground environs came to life. I am glad that he didn’t go overboard on these details, and could still convey the setting as well as he did.

The fight scenes were another high point of this book—they felt big. Not pulpy or overblown, but big. I’m talking about city blocks getting messed up—about buildings and caverns collapsing, the kind of stuff that creates dimension in a fight and creates perspective when viewing the fight. It’s the kind of stuff that makes you want to see the movie! To add to the settings of the fight, the people that fight and the things that attack the companions are powerful. At this point, I thought they would be able to handle some of their foes a bit more easily than they did, but not being able to wade through everyone and everything was just fine. I may have feared for some character’s lives, but after the reincarnations, I’m not too worried about any of Salvatore’s characters.

If you were upset when Salvatore ended the stories of the companions, then this book will be the twenty-year high school reunion you want it to be. If you are even remotely interested in Drizzt or any of his past friends or foes, then this is the first inning in the all-star game you’ve wanted. There are some surprises here and there in this novel, but it ends with a lead-in to the next novel. There are intelligent weapons, magic weapons, magical creatures, drow, dwarves, darkness, poison, and everything else that makes people read fantasy novels, so what are you waiting for? Strap on your swords and hunt for this novel.