Skip to content
Home / Delve into the Depths in the Kobold Blog / Prepared!: The Impregnable Fortress of Dib 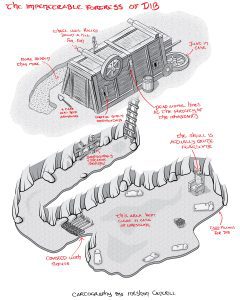 We were traveling the old trade road up near the Blind Hills when we found it: an overturned wagon in the ditch. Evas took to the shadows, scouted ahead, and returned with strange details. The wagon had been transformed—such that it appeared to be a fierce fortress. Signs of goblin-work were apparent: broken shields reinforcing the walls, crude arrow slits cut into the driver’s bench, a makeshift flag hanging limply atop the whole affair. We left it alone, but even at a distance the smell of the odd fortress’s unfinished moat made us wretch…

The Impregnable Fortress of Dib is a location designed to offer a medium/easy challenge to four 1st- to 2nd-level characters.

Before you stands an unusual makeshift fortress. A large wooden wagon has been overturned a few feet from the road. An incomplete moat of sorts rings the structure; the vapors from its gelatinous contents reaching your nose even at fifty paces. The wagon has been reinforced with broken shields and scavenged planks; an unfortunate dead fox has been nailed unceremoniously atop a crude doorway. Slits and holes of various sizes have been bored and carved into the walls, and you hear wicked whispering and rustling coming from within. A flag made from cloth scraps hangs unmoving in the still air.

Dib Halfling-Chewer rules the fortress. Several months back, Dib and his cronies were ejected from a nearby goblin clan for indiscriminate wrestling. Since their expulsion from the clan, Dib and his minions have transformed a trade wagon into a dangerous roadside obstacle. The goblins retreat into the throne room when it is clear the fortress is breached. Assaulting the fortress is run as a combat encounter, with the fortress taking two actions on its initiative (+0). The fortress may:

A general guide to assaulting the fortress is provided below.

Kicking in the Door. Forcing the door takes three solid kicks. Each kick uses an action and requires a DC 14 Strength (Athletics) check. Successfully kicking in the door allows the party to enter the area under the wagon (see below).

Lifting the Whole Damn Thing Up. Lifting and tipping the fortress over takes 2 rounds. Each round requires a successful DC 17 Strength (Athletics) check made by one PC. The DC of this check is reduced by one for each PC assisting. PCs involved in lifting the wagon may take no other actions that round. Failing the check on the second round results in the lifting PC(s) having to start over. Successfully lifting the wagon allows the PCs to enter the area under the wagon (see below).

Smashing a Hole. The fortress can simply be attacked with the aim of making an opening. The fortress (AC 12, HP 40) is considered defeated at zero hit points. Defeating the fortress allows the party to enter the area under the wagon.

Inside the makeshift stronghold, you find a dank and foul-smelling place. A small cauldron of rendered animal fat approaches boiling over a smoky fire. Two poorly made spears sit abandoned on the ground. A ladder suggests the wagon’s inhabitants have dug into the ground below.

Once their fortress is breached, the five goblins inside retreat into the throne room. A DC 10 Wisdom (Perception) check uncovers an oily sack with 25 sp and some shiny rocks.

The Tunnel and Throne Room

You crouch and descend into the goblin’s burrow. The tunnel, precariously carved and shored up with planking, runs straight for 30 feet before turning sharply. Peering around the corner, you see the goblin’s living quarters. A single sputtering torch illuminates the small chamber and the makeshift throne at the far end. Evil eyes blink from behind five small mounds of dirt. Suddenly, you hear the sound of bow strings being drawn…

The goblins make ranged attacks from behind half-cover until forced into melee. At the entrance to the chamber is a simple spike trap. Noticing the trap requires a Perception (Wisdom) check of 12. Disarming the trap requires a DC 12 Dexterity (Sleight of Hand) check. Failure to notice or disarm the trap causes six sharp spikes to spring out of the ground. PCs within 5 feet of the trap must make a DC 13 Dexterity saving throw or take 1d6 (4) piercing damage; a successful save halves the damage. The throne hides Dib’s treasure hoard. A DC 12 Wisdom (Perception) check reveals the seat of the throne is loose and offset. Inside the throne is a small wooden chest containing 60 sp, 15 gp, and a scrap of cloth with Dib’s fortress design notes scribbled in smudged ink.

3 thoughts on “Prepared!: The Impregnable Fortress of Dib”