Skip to content
Home / Delve into the Depths in the Kobold Blog / Trapmaster: The Diviner’s Judgement 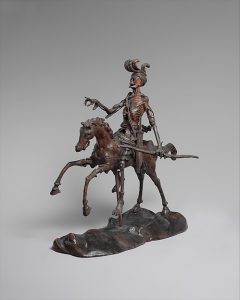 Facing one way and then the other, Mira finally turned back toward the doorway. Reaching out to the double doors blocking her way, she made her choice…

The 10-ft.-wide corridor turns the corner and comes to an end fifteen feet ahead. A sturdy double door bisects the plain stone wall. Both panels sport brass knobs; no lock or keyhole is evident.

The skeleton of a long-dead human lies sprawled in front of the closed doors. The blade of a heavy spear protrudes from the dead man’s back, piercing tattered robes. A ruined spell book, moldy scrolls, and belt pouches full of petrified components mark the deceased as a spellcaster. The bony fingers of the left hand clutch a chart of divination. Amongst the signs and symbols, a scrawled inked message reads:

On the far side, the righteous pass beyond in glory,
While the sinister and leery pass unremarked.

The diviner who met his doom interpreted his divinations correctly and found his glory. The right-hand (righteous) door leads to the beyond (death) in glory while the left-hand (sinister) door allows the cautious to pass alive but unknown. Sadly, the wizard approached the unlocked doors from the wrong side, and opened the wrong panel. A spear through the chest was his reward; the orientation of the blade and shaft through his ribs reveals he was facing the wrong direction when he passed through the panel to his left (but from the far side: the right). Opening the right-hand door as the characters face the portal springs the trap, sending a spear down the right-hand side of the hallway from behind and striking the first creature it encounters.

The left-hand door is completely safe; the components of the trap (including the pressure plate on the party’s side of the door, the bypass built into the left panel, and the spear-firing tube located back at the corner) are near impossible to discern but not difficult to disarm once located. If the PCs pass this way when returning, they should take care to open the correct door, as the trap resets. 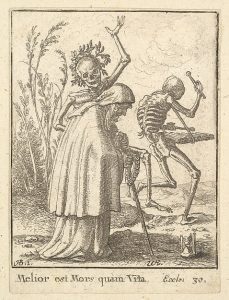 Forensic Clues: A DC 15 Heal check confirms that the skeleton was facing forward when struck by the spear in the absence of player questioning.

Correctly deducing the facing of the skeleton when spitted by the spear is a DC 15 Intelligence (investigation) or Wisdom (medicine) check. Finding the trap is a DC 30 Wisdom (perception) check. Disarming it requires thieves’ tools and a DC 10 Dexterity check. Blocking the firing tube of the spear with a shield or similar object imposes disadvantage on its attack roll as it punches through. The spear makes a +8 attack and deals Dangerous damage on a hit.

Confirming the facing of the skeleton when struck by the spear is a Normal task. Discovering the trap is Ridiculously Hard; disarming it is a Normal Task. The spear makes a Hard attack roll and deals Hard single-target damage.

A dwarf moving carefully down the hall realizes something is strange with the stonework on a 1 in 6, but gets no immediate details. He discovers the pressure plate or firing tube of the spear only with a search on a 2 in 6. Disarming the trap is a delicate tasks check, although it is easy to avoid the trajectory of the spear even if the riddle is not puzzled out. The spear is strong enough to punch through a shield or similar blocking object placed outside the firing tube, but its attack roll is reduced by 5. Unfettered, the spear attacks with a +8 bonus and deals 2d6+2 damage.