Skip to content
Home / Delve into the Depths in the Kobold Blog / My First Gen Con: Monte Cook 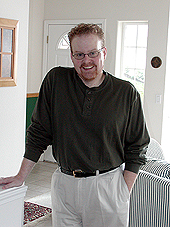 My first Gen Con was particularly exciting because I “had” to go. Fresh out of college, I’d been an intern at the offices of Iron Crown Enterprises in the summer of 1990. In early August I was offered a full-time position as an editor starting in October, but my manager, Coleman Charlton, said that I also had to go work for the company at Gen Con as well. Hardly an arduous task! I’d dreamed of Gen Con since I was 10 years old but had never been able to go, and now I was going as a professional. It was probably one of the happiest and most exciting periods of my life, because it was filled with games, fun, thousands of fellow gamers, and the promise of a future just about to start.

Monte Cook has worked on over 100 game titles in his career, including Return to the Temple of Elemental Evil, The Book of Eldritch Might series, the d20 Call of Cthulhu Roleplaying Game, The Book of Vile Darkness, Monte Cook’s Arcana Evolved, Ptolus, Monte Cook’s World of Darkness, and Dungeonaday.com. He was a longtime author of the Dungeoncraft column in Dungeon magazine. You can find all things Monte at MonteCook.com