Skip to content
Home / Delve into the Depths in the Kobold Blog / KotM Fight! Wendigo 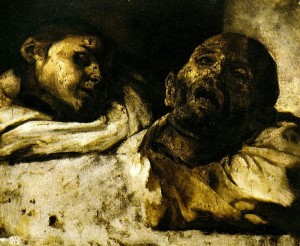 Welcome to the King of the Monsters Contest finals: the wendigo is finalist 9 of 10. These submissions are left almost entirely as they were received with the exception that all submissions have had minor alterations for proper spelling (not grammar), formatting, and the addition of an image. Let the fight commence!

A far more horrific beast stalks the moors, forests, and hills of the land than vile goblinoids and mischievous fey. Those creatures have limits. Not so the cannibalistic wendigo. This monstrous spirit is glutton incarnate; it is nature’s reflection of mankind itself in all of its wanton need and avarice. The wendigo stands gaunt and tall, an emaciated and pale ghost of a man. A low moan of hunger issues forth from its gaping mouth full of gnarled and jagged teeth. This is the sound of nature’s vengeance, the sound of man’s rumbling appetite echoing back…

Nature DC 19: Wendigo are natural spirits that embody unyielding hunger. They seek only to possess corporeal bodies so they may eat and quell their appetite. This is a fruitless endeavor. The wendigo’s appetite cannot be sated.

Nature DC 24: These insubstantial spirits most often arise in areas of environmental tension, such as deep mines, widely harvested forests, plague-ridden cities, and battlefields. The prevailing theory amongst sages and conjecturers is that the wendigo is a primal response to mankind’s encroachment upon pristine natural settings. In short, wendigo are nature’s retaliation against the pillaging of its resources.


[M] Cannibal’s Touch (standard; at-will) ◊ Psychic
Usable only when not possessing a body; +19 vs Reflex; 2d8 + 7 psychic damage.
Secondary Attack—+19 vs Will; as a free action the target makes a melee basic attack at the nearest non-insubstantial creature.

[m] Devour Spirit (standard; at-will)
The wendigo possesses a body. If this body is unconscious or dead, no attack roll is needed. A wendigo can possess an aware creature only if it is bloodied; it does so with the following attack:
+19 vs Will; the target is possessed (save ends).
While possessing a body, the wendigo has the following traits:

A wendigo’s insatiable hunger makes the beast wildly aggressive in combat. Possessing a body with devour spirit is a wendigo’s chief priority. It will often keep is action points in check, so that it may spring this attack the moment an opponent is bloodied. When in possession of a body, the wendigo has even fewer qualms about wading into battle. Nearly all of the damage it takes during that period instead harms its host. Possessing a body allows the wendigo to use ravenous grasp followed by voracious bite in an effort to stem its hunger; accordingly it will use these powers as often as possible.

The wendigo knows only hunger. It does not retreat nor does it parley. It only devours.