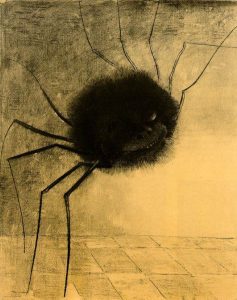 Lurking in jungles and thick caves, many eyes watch your movement. Not an unusual feeling for adventurers. What is unusual is that this creature locals fear not just because it’s deadly, but because, if you survive, life will never be the same again.

The Amazon spider is an oddity among beasts. At first, it seems to be like any other giant spider, but those who fall victim to its poison learn that it possesses abilities like nothing else of this world. There are those who claim that it was once an aberration that spent so much time in the wilds of the material world that it grew to be like the native inhabitants, losing most of its odd abilities over time. Others claim that only the Spider Queen herself, would usher such a fiend into this world, known for her dismissal of men. Then still some claim that a mad wizard is to blame.

None denies it is a beast to be wary of. Once it has its sights on you, your toughest challenge may be to escape with all your parts still in the correct places…

Nature 18: The Amazon Spider, known for many comic stories of brave knights turned damsels, actually confronts female warriors just a quick as male. Its poison is slow to act, but its attacks are fierce and deadly.

Nature 23: It is said that the heart of an Amazon spider can be used by potion makers to make one single vial, which can reverse the gender back. The Amazon spider is sometimes hunted by those wishing to remove such a curse, acquired from other sources.

In combat: The Amazon spider likes to work on a single target at a time, using its loose webbing to keep enemies in direct combat with it. When multiple enemies begin focusing on it, it will use web swing to slide between one or two surfaces, repositioning itself to overtake a new foe.

Encounters: The Amazon spider is sometimes found in the wild, joining up with other spiders or stealthy hunters. More often though, they are caught and trained by savage, gender focused tribes. It is a favored pet of drow and barbarians.

MOVE ACTIONS
Web Swing • At-Will
Effect: The Amazon spider leaps 6 squares. It must begin and end this movement within 3 squares of a stationary surface at least 10 ft. off the ground (such as a wall, ceiling, or tree). The Amazon spider has +2 to all defenses vs. opportunity attacks provoked for this movement.

TRIGGERED ACTIONS
Loose Webbing • Recharge 5, 6
Trigger: An enemy within 1, moves away without shifting.
Attack (Immediate Interrupt): +17 vs. Reflex.
Hit: The target is immobilized (save ends).