Skip to content
Home / Delve into the Depths in the Kobold Blog / Divine Favor: the Cleric 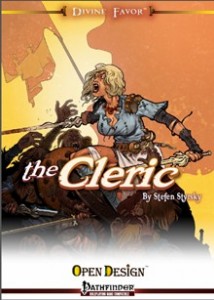 The lich chuckled dryly as the scrying glass showed yet another party of would-be heroes die in one of his fiendish traps. For centuries he had existed in perfect safety within this maze of stone catacombs, a lair crawling with unnatural guardians he had raised from the dead or summoned from the Abyss. Nothing could touch him.

“The gods will honor their sacrifice,” said a voice at his shoulder. He whirled in astonishment, then drew back in pain at the aura of divine radiance shining from the grim warrior-priest before him. “Nergis, deathless sorcerer of the Wastes: for five hundred years you have spread misery and terror unchecked. I come in the name of the gods who rule the heavens: Your last hour has come, foul one. Tonight you die the final death.”

With a cry the warrior raised his warhammer and charged the lich, his eyes blazing with holy fervor…

The cleric has a vital yet complex role within a party: healer, backup wizard, backup fighter, and a specialist in dealing with the undead. Divine Favor: the Cleric is an invaluable resource to anyone wanting to play one of the oldest character classes in fantasy roleplaying, with many new options for the Pathfinder Roleplaying Game.

Designed by Stefen Styrsky, Divine Favor: the Cleric begins with a meaty section on making the most of the class, defying conventional wisdom that its primary role is as the party healer. From there it dives into new domains (Alchemy, Apocalypse, and Prophecy) and subdomains (Books, Entropy, Exorcism, Gambling, Horoscope, Lies, Potion, Transmutation, Truth, and Weapons.)

The book offers 9 new cleric archetypes that bring to life a rich variety of styles one could take advantage of when playing this class. Enthrall others with the power of your words as a charismatic, strike with holy fervor armored only with the power of your faith as an enthusiast, battle the lords of the Abyss for the souls of their wretched victims as an exorcist, or do honor to your god through mastery of its favored weapon as a weapon-sworn cleric.

Following a section on new channeling variants, six new spells help build out the cleric’s role as party magic-user. For clerics whose gods are patrons of luck, wealth or fortune, there’s fortune’s frown, lucky break, and lucky totem. Other spells include reading aid, manipulate symbol (which protects against a symbol spell) and wind down (which decreases the duration of one ongoing spell or spell-like ability.)

Pick up Divine Favor: the Cleric in the Kobold Store and put the fear of the gods into evildoers! Also check out the other books in the Divine Favor series covering cleric, druid, paladin, and inquisitor.

4 thoughts on “Divine Favor: the Cleric”