Skip to content
Home / Delve into the Depths in the Kobold Blog / Loaded Dice: Bigger Guns 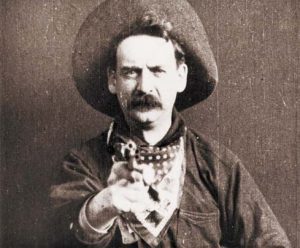 Why Do Gunslingers Give So Many GMs a Heart Attack?

I think by now we’ve all had that argument with our storytellers. You know the one. It has raged across forums and at more Saturday night gaming tables than I’d care to mention after Paizo released Ultimate Combat. It’s the debate that starts with the question, “May I play a gunslinger?”

The Argument for Gunslingers

The simplest argument is that if a player has the book, and that book is part of the canon of a game, he or she should be allowed to play it. This is particularly true if a GM is running a game set in Golarion, the world Paizo has detailed for Pathfinder games and where at least three countries have gunslingers aplenty (the Mana Wastes, the Shackles, and Numeria, for those who have the Inner Sea World Guide handy). As long as players are willing to explain how their characters came to practice the art of the gun, and why they aren’t found within those national borders, there’s really no reason to bar them.

The Argument(s) against Gunslingers

People have put forth a lot of arguments against the gunslinger class, and, after looking over the reasoning, there is really only one reason to bar the class from a game: the GM says no. There may be very legitimate reasons for the GM to choose not to allow the class, such as running a game set in a bronze-age world where both magic and technology are rare, but most other arguments against the class as a whole fall pretty flat. Let me show you what I mean.

The Class Is Broken

Gunslingers were designed specifically for Pathfinder, and the powers they’re given are relatively minor in comparison to what other classes gain access to. They have a combat class’s base attack bonus progression, they can use most weapons (including guns), and, as they go, they gain access to deeds and grit. These deeds cost points to use, and while they’re useful (a 1-round dodge bonus to Armor Class, quickly clearing a misfire, being able to pool several shots into a single blow), they’re hardly game breakers. Aside from a bonus to initiative and to touch Armor Class (necessary since the base class doesn’t gain access to more than light armor), gunslingers are like fighters who gain ki powers instead of bonus feats.

The basic firearms presented in Ultimate Combat are minor threats past level 3 or 4. The most dangerous firearm that doesn’t require a cart to haul around is the double-barrel musket, which deals d12 damage. While it’s true that firearms are considered touch attacks within the first range increment, the farthest a weapon can fire is 40 ft. After that, it’s considered a normal attack, and it takes a range penalty on top of that. Add to guns the fact that they have a misfire range, can blow up in a character’s face, and can take anywhere from a single action to a full round to reload, and the danger is vastly overstated. Even if a gunslinger specializes in reloading quickly and uses a weapon with a spray pattern, guns are not much of a danger to enemies with damage reduction, cover, concealment, and magical barriers against attacks.

Many GMs won’t allow advanced firearms in their games, at least not until higher levels. If a character doesn’t have multiple attacks per round, there’s not much to be gained from a firearm with multiple shots except not needing to reload. This is a useful trait, but it doesn’t make a gunslinger as dangerous as a spellcaster unless there’s an antimagic field. That said, assume for a moment that a fighter simply took the trait Dangerously Curious, and invested heavily in Use Magic Device. Would allowing the fighter to cut loose with ray spells from a wand, which have a farther range and often a bigger punch than guns, be any less game-breaking than allowing a gunslinger with a one-shot pistol that does a d8 of damage?

There’s No Reason Guns Can Be Made in this World

For some reason, lots of people think guns are extraordinarily difficult to craft. They’re not. Players have Craft (Alchemy) on their skill lists, and all of the ingredients necessary for making black powder exist in any world that even closely resembles Earth. With an entire class dedicated to alchemy and making bombs, black powder is a tiny, tiny technological achievement. After that, all someone has to do is stuff it down a metal tube followed by a lead bullet from a sling, and voila, the gun is made! It’s also important to remember that a gun doesn’t require black powder to work. Since the 1770s, air rifles powerful enough to punch through steel pipes at range (like this one) have been possible to make. If a player has access to metallurgy, a powerful bellows, and creativity along with some good rolls, inventing one of these weapons is fairly simple.

Lastly, though, if a game allows spellcasting classes, then that means there is magic in the world; all bets are off as far as what’s possible. When using simple spells like create water coupled with heat metal, it’s possible to build a steam engine that requires no fuel and which can run on indefinitely. Making a gun with that sort of physics-altering power in the world is truly a simple, and relatively minor, achievement.

There are some players and GMs who feel that anything that doesn’t show up in classic high fantasy (think Lord of the Rings), or in sword and sorcery (like Conan), doesn’t belong in their games. There is nothing to be said to that because it’s a matter of personal taste and belief, versus an argument about a fact.

Gunslingers are, when examined as an archetype, some of the most ideal heroes. From the Magnificent 7 to Roland Deschain, heroes who fight with guns and grit fit very well into the feeling of adventure a game is often looking for. If a gunslinger simply does not fit into a world, particularly one the GM has created, then that’s a storyteller call. However, if there’s a place in the established canon for a gunslinger, and there’s an entire class for them, the only reason to deny them is based purely on story.

It’s important to remember that while the world influences the PCs, the PCs also influence the world. A gunslinger coming to a place where such folk are not common will start tongues wagging and could lead to attempted mimicry or a demand for the gunslinger to reveal his or her secrets. A daring wielder of the art of the gun might even gain a following among those who want to imitate a gunslinger’s ways, for good or ill. Bottom line; if the players can do it, then the bad guys can do it too.

Lastly, and this is a note for all GMs regardless of their stance on the issue, there is a counter for everything. If a gunslinger starts getting cocky, put the party up against enemies who use cover or tower shields so that the gunslinger can’t get a clean line of fire. Introduce enemies with armor modified to stop bullets, a la the Gun Tank (Ultimate Combat, page 50). Also, as with any other character, a gunslinger can’t shoot what he or she can’t see, so using darkness, concealment, invisibility, and all the other tricks of the trade is just one more way to tip the scales in the bad guys’ favor.