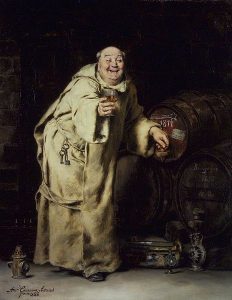 On occasion, a monk chooses to take on the vow to avoid enslavement to material possessions. Although far from the carefree attitude of overindulgent revellers, the monks that follow this path are often surprisingly free spirited, outgoing, and generous. More than one drunken master has chosen to live according to the tenets of this vow. Normally, archetypes that give up the still mind class feature cannot take vows: an exception is made for drunken masters (see Advanced Player’s Guide), who embrace freedom and wish to take on the vow of poverty although they still cannot take other vows. Followers of the path of freedom carry a sizeable drinking gourd, capable of holding 2 gallons of liquid…

Monks who have committed a serious affront to law, usurped a personal conviction, broken a promise, or otherwise strayed from their path sometimes inflict the vow of poverty on themselves as an act of penance. Such monks wear hefty bracers or armbands, the weight a constant reminder. Many choose to take the vow of chains as well, binding the bracers together with heavy or restrictive chains. Monks that follow the vow of poverty as an act of penance often live uncommonly long lives, as if fate itself intervened to allow them more time to reflect on their sins.