Skip to content
Home / Delve into the Depths in the Kobold Blog / Althaghast, the White Necromancer 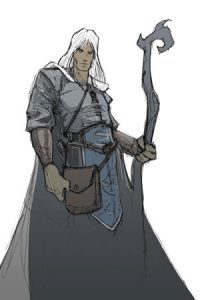 Within the pages of Kobold Quarterly #19, you’ll find the white necromancer, a new class created for the Pathfinder Roleplaying Game. Designer Marc Radle has crafted a character for you that uses the new class, and you can see the result below. Our sample white necromancer has been illustrated by the talented Chris McFann.

Although many necromancers are foul, twisted individuals obsessed with evil and death, a few embrace the knowledge that true necromancy involves manipulating the powers of life as well as death and undeath.

These enlightened few are known as white necromancers.

Althaghast is one of these enlightened few. He does not walk the paths of evil as dark necromancers do. Instead, Althaghast honors the dead and seeks to aid his allies with their power as well as his own. Althaghast has a deeply profound understanding of life’s eternal cycle, which also makes him a potent healer in addition to being a powerful spellcaster.

Althaghast’s penetrating eyes are kind and compassionate. He is tall and thin with long, white hair despite his relatively young age. A sense of quiet power settles around him wherever he goes.

SPECIAL ABILITIES
Evil Necromancy Spells: Althaghast is extremely reluctant to cast evil necromancy spells (spells of the necromancy school and the evil descriptor).  He is not strictly forbidden from doing so, however, and he might occasionally cast such spells if he feels the need is sufficiently justified. When Althaghast casts an evil necromancy spell, he must use up two spell slots of that level.

Life Bond (Su): Althaghast may create a bond between himself and another living creature as a standard action. This power has a range of 90 feet. Each round, at the start of Althaghast ’s turn, if the bonded creature is wounded for 5 or more points below its maximum hit points, the bonded creature heals 5 hit points and Althaghast takes 5 damage. He may have up to ten such bonds active at the same time. This bond continues until the bonded creature dies, Althaghast dies, the distance between Althaghast and the other creature exceeds 90 feet, or he ends it as an immediate action.

Life Sight (Su): Althaghast gains blindsight to a range of 10 feet for 10 rounds per day. This allows Althaghast to detect only living creatures and undead creatures. The sight also tells him whether a creature is living or undead. Constructs and other creatures that are neither living nor undead cannot be seen with this ability.

Lore of Life and Death (Ex): Althaghast adds his Wisdom modifier in addition to his Intelligence modifier when making Knowledge (religion) skill checks pertaining to subjects such as death, burial practices, undead, or the afterlife. In addition, Althaghast adds a bonus equal to 1/2 his white necromancer level to all Heal skill checks.

Necrotic Transfer (Su): Althaghast can transfer some of his life essence to another living creature. As a standard action, when Althaghast touches a subject, he can sacrifice up to 30 hit points from his own body and transfer those hit points to the creature touched. These hit points heal the subject, but they cannot raise the subject’s hit points higher than its normal hit point total.

Spells Althaghast casts arcane spells drawn from the white necromancer spell list. He can cast any spell he knows without preparing it ahead of time.

Voice of the Grave (Su): Althaghast can speak with dead, as the spell, for 10 rounds per day. These rounds do not need to be consecutive. The dead creature takes a -2 penalty on its Will saving throw to resist this effect.

15 thoughts on “Althaghast, the White Necromancer”