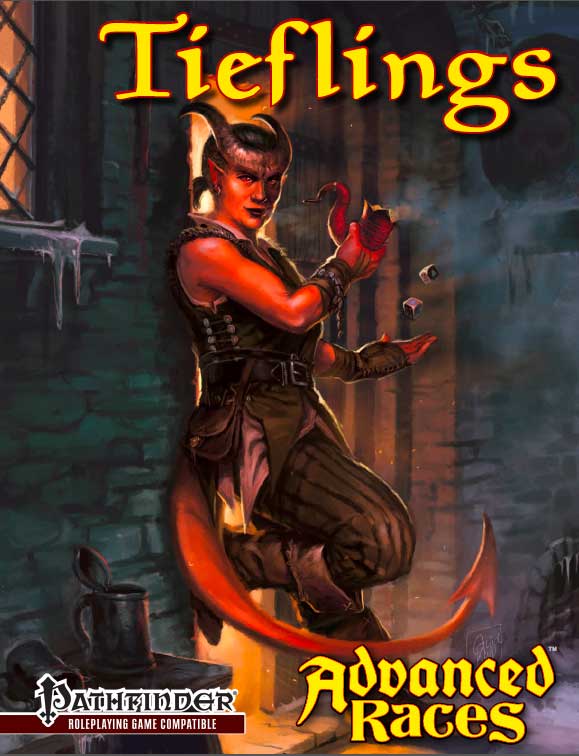 Master the secrets of the Hellborn…if you dare!

More than 2,000 years ago, Caelmarath’s most ambitious spellcasters entered into dark pacts with certain denizens of the Eleven Hells. In exchange for magical prowess they coupled with hellish beings, ensuring their bloodlines would forever carry a fiendish taint. The scions of these unions were known as tieflings—the Demonmarked, the Hellborn.

If you need convincing before you crack open this diabolical tome, here’s a taste of what you’ll find within: the Master’s ambassador archetype… 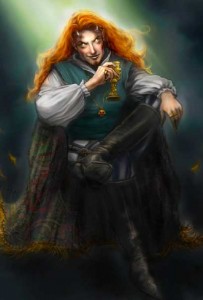 Bombastic Herald (Su): A Master’s ambassador can use his performance to spin awe-inspiring tales of his patron’s sorceries and ley-line control—and convince his companions that these forces are on their side. To be affected, an ally must be within 30 ft. and able to hear the bard’s performance.

An affected ally gains a +1 morale bonus on Will saves and a +1 morale bonus to attack and weapon damage rolls. At 5th level, this ability allows the Master’s ambassador to haste affected allies as the spell for a number of rounds equal to his bard level. Bombastic herald is a mindaffecting ability that uses audible components. This ability replaces inspire courage.

Matchmaker (Su): A Master’s ambassador of 6th level or higher can use his performance to convince a fascinated creature that Demon Mountain’s ruler or one of his children wishes to woo it. This ability functions like a charm person or charm monster spell. Using this ability requires a standard action to activate and a free action to continue the fascinate effect. It does not disrupt the fascination.

Charming a person or monster does not count against a bard’s total rounds per day of bardic performance. A Will save (DC 10 + 1/2 the bard’s level + the bard’s Cha modifier) negates the effect. This ability affects only a single creature and has no effect against animals. This is an enchantment (charm), mind-affecting ability and relies on audible components. This ability replaces suggestion.

Terrible Truth (Su): A Master’s ambassador of 20th level or higher may use his performance to reveal the terrifying, unadulterated power of his patron, temporarily paralyzing nearby enemies with fear and dread. To be affected, enemies must be able to hear and see the Master’s ambassador perform for 1 full round and be within 30 ft. Enemies receive a Will save (DC 10 + 1/2 the bard’s level + the bard’s Cha modifier) to negate the effect. Creatures that successfully save are shaken for 1d3 rounds. Creatures that fail the saving throw are paralyzed for 1d3 rounds. Terrible truth is a mind-affecting effect that relies on audible and visual components. This ability replaces deadly performance.

Foolproof (Ex): At 2nd level, a Master’s ambassador becomes resistant to charms and compulsions. He gains a +2 bonus on saving throws made against mind-affecting effects. This ability replaces well-versed.

Dark Confidant (Ex): A Master’s ambassador gainsa bonus equal to half his bard level on Diplomacy, Knowledge (planes), Knowledge (history) and Knowledge (local) checks (minimum +1). Once per day, the Master’s ambassador may reroll a check against one of these skills, though he must take the result of the second roll even if it is worse. He may reroll one additional time per day at 5th level and every five levels thereafter. This ability replaces bardic knowledge.