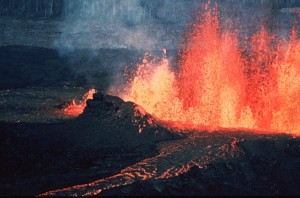 Outside of the world’s major religions, or sometimes as a small subsection within them, you will occasionally find clerics with a unique connection to the land. Much like druids or rangers, these divine casters will sometimes gain inspiration, power, or assistance from the land itself rather than from a particular god, and in some cases the land may, in fact, be a god. Here are three examples of such divine practitioners.

Most of those with access to the Island Domain are concerned with maintaining the balance between their land and the ocean surrounding it. As a giver of both life and death, the water is to be cherished and feared. When water can’t be controlled, it can be traversed. The clerics also work with the island itself, manipulating the sand and soil to ideally foster their communities.

Stepping Stones (Su): You can conjure a number of flat, floating stones that follow you through the air. You can summon one initially, plus an extra one every four cleric levels, up to a maximum of six at level twenty. The stones last for a period of one minute per cleric level, and they can be directed to stay still, anywhere between ground (or water) level to 3 ft. in the air. The stones will otherwise act as the floating disc spell.

Watery Path (Su): Starting at 8th level, you may walk on water or other liquids as with the water walk spell for a period of 1 round for every two cleric levels. These rounds need not be continuous.

2. Buoyancy (Pirates of the Inner Sea)

Revered as the chimneys of deific forges, the prisons of terrible entities, or sometimes as gods themselves, volcanoes attract faithful and powerful followers. Volcano clerics foster fissures in the earth to bring up the fire from beneath, whether for good or ill. Ash, magma, and poisonous gasses are also among the gifts they receive.

Tephra Trap (Sp): You can create a Tephra Trap, a hidden patch of ground where a temporary rift extends into the earth, prepared to eject a small explosion on any who steps upon it. The explosion deals 1d8 damage, +1 damage for every two levels of cleric you possess. The Tephra Trap takes 1 minute to create, and the DC to make a Reflex save for half damage, locate it, and disarm it is 10 + 1/2 your cleric level + your Wisdom modifier. The Tephra Trap lasts for one hour per cleric level.

Caldera Calling (Su): Starting at 8th level, you can temporarily conjure calderas that lead straight to the world’s core (or another sufficiently flammable locale of your deity’s choosing). Treat the caldera as a cylinder with a 10-foot radius that deals 3d6 fire damage and 1d6 bludgeoning damage. One caldera may be created per four cleric levels, and they may be created up to twenty feet away per cleric level. Using this ability in a region with strong volcanic activity upgrades the damage from 4d6 to 4d10. The saving throw to halve the damage is 10 + 1/2 your cleric level + your Wisdom modifier.

Typically found only in the world’s deserts, the Mirage Domain is known in many places where stretches of level, flat land can be found. Clerics of deserts, tundra, oceans and (in very rare cases) the roads of ancient kingdoms understand how to bend and refract light to hide what is there and reveal what is not.

Veiled Refraction (Sp): You can bend and refract light around yourself, creating a number of faintly out-of-focus images where the spell is cast. The effect is the equivalent of a blur spell, but only cast upon the caster, and only for a duration of 1 round per caster level. You may do this a number of times per day equal to your Wisdom modifier.

Distant Reflection (Su): Once per day at 8th level, and one additional time per day for every four levels of cleric gained beyond that, you may touch a willing creature or object of up to Large size and make it vanish as if through a casting of invisibility. This effect lasts for a number of rounds equal to your cleric level. In addition, the moment the creature or object vanishes, the illusion of the creature or object (as if through a minor image spell) appears a distance away from the caster within line of sight up to 30 ft. per cleric level. If something ends the invisibility effect (such as by the target making an attack) or if something disrupts the minor image effect (such as by interacting with it and disbelieving it), then both effects immediately end.

2 thoughts on “Faiths of the Land”