Skip to content
Home / Delve into the Depths in the Kobold Blog / Midgard Summer, Week 3 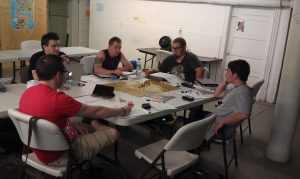 Midgard Summer continues with Gravebinder’s Daughter. When we sat down to begin, I told everyone they had to play someone different than they had last game so that they could stretch their roleplaying muscles and experience more of the flavor that is Midgard. Jiro’s player from last time scoffed because he wanted to play a kobold again, but he eventually chose Coowak, who helped save the day at the end.

Having some familiarity with the characters, the players got started roleplaying as the Gravebinder approached them to beg for their help as heroes. Coowak’s and Jiro’s players wanted to know how much they would get for rescuing his daughter. Gunnar pushed them aside, letting the Gravebinder know they would rescue his daughter for the greater good and no payment was necessary. After a short in-character argument, the party continues on without the Gravebinder’s money—which none of the other PCs let the paladin forget throughout the whole adventure.

The encounters went by quickly, and the players rolled a lot of criticals during the combats. Arianisal almost soloed Mirlandra with two criticals on her bow. They continued on to the final battle with Gunnar hitting the BBEG after he smote him—Gunnar’s player got a critical hit! The BBEGs minion’s were taken out by Coowak’s net of comets and their failed saves. Ariansial channeled to finish them off.

The party returned to the Gravebinder with his daughter. He was happy and thanked them for doing so. Even after the treasure they got from the encounters, they still reminded Gunnar they could have been 3,000 gp richer.

After the adventure was over, we spent time making up characters for the Raven’s Call in two weeks for the fourth and final week of Midgard summer. But it will not be the end of Midgard—it will continue on in biweekly Midgard adventures after I return from Gen Con.