Skip to content
Home / Delve into the Depths in the Kobold Blog / Your Whispering Homunculus: Peculiar Relationships 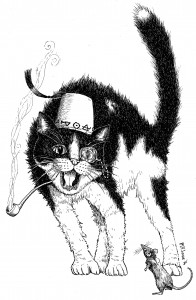 “So, dear master, this is the end. The magic jar is readied, and the spellbook is before me, yet still you snore.

“How sad it has to come to this. I only hope my trotter will not hamper my casting. Let the gods of magic and familiars and pig parts be on my side.

“So, goodbye cruel master, prepare to be my slave…”

Although we say it and shouldn’t, this whole master/familiar/follower/companion relationship is odd. It can’t be healthy, spending all that time together; one party giving out all the orders, the other doing exactly as instructed. Surely at some time one party is going to rub off on the other, or worse, rub the other up the wrong way?

The chart below gives you a few suggestions about the quirkier behavior exhibited by familiars and homunculi. It could also, if you wish, be extended to other close relationships such as animal companions, animated undead followers, or animated objects that spend just that little too long in human (or elf or gnome or goblin) company. Some of these traits may not suit particular familiars of followers, adjust them or assign them as you wish.

As ever, consider the YWH ideas as gentle suggestions to sprinkle like a delicate seasoning into your adventures. If you like your adventures a little more hot and spicy, consider adding a few traits to each familiar, or have familiars take on odd quirks with each other, or better, have them take on unwelcome habits of the PCs themselves.