Skip to content
Home / Delve into the Depths in the Kobold Blog / Book Review: The Return of the Discontinued Man by Mark Hodder 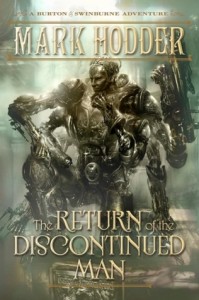 It’s 9 p.m. on Feb. 15, 1860, a point in time that will change the course of the future—or at least this future, because you can’t change the past. Or can you? Spring Heeled Jack is back, and he is looking for Sir Richard Burton. Not only is this mythical being back from the future, but a blood red snow is falling on London. Meanwhile, while getting assaulted by multiple Spring Heeled Jacks, Burton is hallucinating and he believes someone from somewhere in some time is trying to send him a message. When Burton figures it out, he and the Cannibal Club must organize an expedition through time itself to save the British Empire! God Save the Queen!

Hodder has shown a propensity for blurring the lines between historical fiction, steampunk, and the writings of HG Wells. The Return of the Discontinued Man takes all of the blurring and creates a steampunk mash-up of the movie THX, Pink Floyd’s the Wall, the entire Harry Potter series, and a little Animal Farm into one story. If it is starting to sound confusing and a bit complicated, it is, and it takes Hodder the first hundred pages of the book or so before he actually starts making sense. I have read the other installments in the Burton and Swinburne series, and even with the pervasive theme of time travel, Hodder held things together, but he was very close to losing it on this one.

If you have not read any of the other books in this series, then this installment will only confuse you. Hodder did take the time to give enough background info so that a new reader could function, but there are so many contexts in the series that this book is not the right starting point. Time travel is confusing at the best of times, and when you have multiple timelines seemingly bleeding into one, it gets even murkier. Then add the drug-induced hallucinations that Burton is having and you can see how difficult this book could be to follow at times.

This book requires you to read the previous books in the series for full enjoyment, but I don’t think that was done on purpose. That said, I must applaud Hodder since I feel like many lesser authors would have avoided this subject altogether or messed it up so badly that it would have never come to print. Hodder has a knack for juggling multiple time periods and placing the seeds in the past that will dictate the future. Hodder was not afraid to keep things complex and at no point did he shy away from taking the more difficult path. At times, explanations were simplified for some of the characters (and thus the slow readers like me), but even with those intellectual dumbing-downs, this story was still hard to follow at times.

I’m not sure if Hodder did it on purpose, but what I perceived as minor homages to things like the movie THX and a few other iconic franchises were great and subtle. The faceless masks that the constables wore reeked of the cops in THX—maybe I’m reaching on this one, but that was the first thing that hit me when I read the description. The faceless mask of authority is nothing new, but in the context of this story, it was exactly what was needed. This was also horrible because Hodder fell into what I call the English Theme trap. Here is how this English Theme trap works: The English have not forgotten what it is like to fear the rise of a tyrant or dictator. This fear permeates much of their literature and films (Harry Potter, Animal Farm, V for Vendetta, and so on), and Hodder fully fell into the trap. For an author who has shown such originality, I felt like this was a very typical English decision. I can’t blame the guy, and I don’t hate him for it, but of all of the directions he could have taken?…

This was a well-written book that is deliciously complex and intricate. Hodder inserted fictional versions of very real people and situations into an exciting setting that is as asymmetric as it is amorphous. If you like steampunk, time travel, and quasi-historical fiction, read the tales of Burton and Swinburne. If you are looking for a casual steampunk read, go elsewhere—not because it is a bad story, but because you will get confused, then frustrated, and then might decide you don’t like Hodder, when you really should.