Skip to content
Home / Delve into the Depths in the Kobold Blog / Your Whispering Homunculus: At the Horse Fair, Part 2 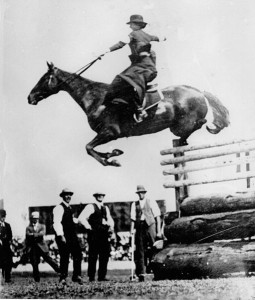 Master Pett’s Your Whispering Homunculus presents only the finest in British gaming. Indeed,  you  likely are not to find a more comprehensive assortment of miscellany around.

This sample annual fair takes place on a large meadow and draws folks from miles about to sell and trade in horses. It lasts for 3 days and culminates in the Heffrey Chase, a popular horse race.

The traders are a mixed bunch, from decent folk to shifty thieves anxious to be rid of stolen goods. Diplomacy checks (DC 20) can be used to ascertain the honest traders from the bad; however, these traders know their stuff and demand premiums for their mounts…

The race itself attracts hopefuls from all around, and at the start, some fifty or so riders are ready for the off.

The rules presented here offer one option to run a horse race using the scores of various skill checks, others could include simple run offs between two opponents or use of Perception checks to pick the best route in a cross-country course.

Of course, not only humans race. Hobgoblins in particular are known to race horses as a dare along particularly dangerous trapped tracks. Other animals are used as mounts by other cultures: for example, the infamous Gruurg Khrargh (Owlbear Chase) of the orcs and the Worg-Gumpygrumpy (Warg run involving baby rabbits as bait) of the goblins.

Players joining in this race face a series of Ride and Handle Animal skill checks, the total value of which should be totaled. If characters fall from their mounts, they score 0 points for that section. Details for each section are given together with the running total of the first three horses (rather than rolling 50 sets of dice). Use of magic is greatly frowned upon and a number of influential merchants have hired watchers to ensure fair play. Cheats are banned for life.

The First Jump, Heffrey’s Hang: This hang requires a Ride check (DC 15) to clear. (Remember to keep a running total of the value of all the PC’s checks). This is followed by a long straight along the slippery meadow where the rider must spur its horse on (Handle Animal, simply add this score to the running total): first place has 44 points, then 43 and 41.

Boswell’s Bonce: This jump is a slight rise that looks like a bumped head (Ride DC 20). Riders then spur their mounts on along a hill over the meadow, adding another Handle Animal check to the total: 100, 99, and 96.

Cascade: Designed as part of a waterfall, the jump is easy, but the water makes the animals skittish (Handle Animal DC 15 avoids falling): 141, 141, and 123.

Heffrey’s Wall: This notorious jump has been the end of many horses. It’s a brutal jump (Ride DC 25), followed by a sprint to the finish line along a very long course which is thronged with cheering crowds, adding a final Handle Animal check to give the grand total.

The winner in this case totals 180, with second on 174 and third on 170; only the winner gets the prize. If this is a PC, then it will be handed over at a special ceremony in front of many influential locals—such a fine rider may find his services in sudden demand.

Not only horses have unique traits. Many other mounts have their quirks, too: from camels to griffons, riding dogs to dire stoats. When generating traits, do so based upon the animal’s Intelligence and modified according to their size and background. Again, traits affect prices proportionate to the mount in question.

6 thoughts on “Your Whispering Homunculus: At the Horse Fair, Part 2”