Skip to content
Home / Delve into the Depths in the Kobold Blog / Real Steel: The Shiv 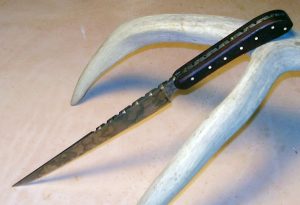 The shiv is a nefarious blade that is a favored tool of those who do night work.

That a shiv is a knife is indisputable. Exactly what type of knife that word describes is sometimes the subject of debate. The word itself derives from the Romani word chiv, which translates roughly to any sharp or pointed knife-like weapon. The word shiv is sometimes used interchangeably with the word shank, which is most often used to describe a homemade stabbing weapon made by the inmates of prisons. For the purpose of this discourse, a shiv is a relatively long and slender single edged and pointed knife with no guard, bolsters, or pommel and with the primary function of stabbing although it is also capable of cutting. It is designed to kill and isn’t much good for anything else…

The shiv differs from dirks and daggers (exactly what makes a knife a dirk or a dagger is yet another source of debate) in that dirks and daggers are generally accepted as double edged and pointed, with a relatively thick blade and generally heavier construction. Daggers will usually have a guard and pommel, and dirks will usually have bolsters. Both daggers and dirks have significant ceremonial history and both are often made with precious metal and gemstone adornments. Not so the darker-purposed shiv.

Light and fast in the hand, a shiv blade is just thick enough at the spine to support stabbing unarmored targets but long enough to extend the users reach considerably and allow the penetration of thick clothing. Knives like this were historically used by assassins and would have been carried extensively by thieves to defend themselves if caught.

The hardening through heat treatment of this thin and delicate blade is critical. If the blade is left too hard after quenching it will break. If it is tempered too soft, it will bend. I made the shiv in the accompanying photos from 1084 tool steel using the stock removal method. I used 1084 steel because it’s very easy to heat treat perfectly when compared to other simple carbon steels. Stock removal simply means removing all the metal that doesn’t look like a knife. I used a 72” belt grinder but it can be done with hand files. 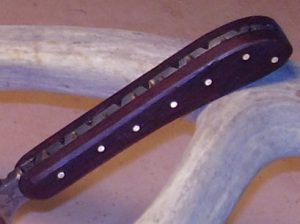 It is very likely that the killing power of an assassin’s blade would have been enhanced by poison, which could have simply been applied to the blade and allowed to dry, or applied to pockets built into the spine. Decorative file work would have served this function well, and would be capable of storing multiple doses of an alchemist’s concoction. The exposure of the steel to these alkaloid compounds would have oxidized and etched the blade, leaving a pattern that tells the blade’s dark history. I put some very rough file work on the spine of the knife and applied a mustard finish (yes, real mustard: in this case Grey Poupon coarse ground) to simulate the poisons bite on the blade.

The blade was at last finished with cocobolo handle slabs and seven brass pins. Seven is a lucky number, and luck is something both needed and appreciated by those who hunt in the darkness.

8 thoughts on “Real Steel: The Shiv”