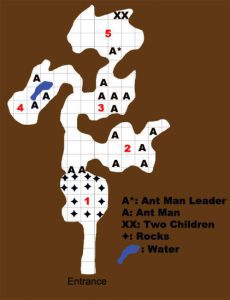 The peaceful village of Holfston is experiencing problems with insects—giant ant men to be exact. The villagers believe something has disturbed these creatures, pushing them out of their normal hunting grounds and into the village. The militia has fought hard to stave them off, but ant raiders recently wounded three farmers and absconded with two village children.

The ant men are scouting for new territory, food sources, and slave labor. Their new queen seeks to expand her city and realm. She intends to annex the human settlements and have the successfully subjugated humans perform the construction tasks alongside her worker ants. To achieve her plan, she has birthed more soldier ants and sent them out to scout and then conquer. They capture children when they can, since the ant men can more easily dominate the young ones.

Because of the ant men’s high Toughness (8) and their sheer numbers, this adventure is recommended for Seasoned characters.

The characters arrive in the village about four hours after the abduction. The village is abuzz with activity as the villagers are arming themselves with hoes, sickles, and pitchforks in preparation to attack the ants. Two women wail uncontrollably as others try, unsuccessfully, to console them. When the villagers notice the characters, or when the characters make themselves known, the villagers cling to them, asking for help in rescuing the children from the “giant ant men.” The insectoids kidnapped a young girl of eight named Aylena and her cousin Carston, a boy of six, who were playing in the fields while their fathers (two of the wounded farmers) worked nearby.

A successful Tracking roll leads the characters past the village to a hilly area with natural caves, just two miles west of the village. On a raise, the searchers discern the scouting party contained five ant men in all; the villagers say three ant men abducted the children.

Characters local to the area may make a Common Knowledge roll in regard to the ant men. Success reveals the creatures usually travel in parties of at least 20 soldiers and a commander, preferring to take prey out quickly with an overwhelming show of force. Therefore, the few insectoids the farmers encountered were most likely scouts.

Into the Ant Cave

A jagged crevice, tall and wide enough for a human to squeeze through, marks the entrance to the hill. Inside, a 5-ft.-wide, 10-ft.-high tunnel runs for 20 ft. before ending in a large opening into Area 1. Fifteen ant men and their commander (wild card) currently reside within. The commander sent out a patrol of five ant men to scout the area and gather more food. The scouts return to the cave 15 rounds after the characters enter.

1. Characters peering into the 25-ft.-high, rock-strewn cavern see that several adult-sized skeletons lie on the floor within, their weapons still by their sides and their leather armor falling off their clean bones. Large boulders (roughly 5 ft. high) in the northern part of the cavern block the entrance into a cavern beyond, except for a small path between them. Have the characters make Notice rolls. On a success, they hear movement up ahead. On a raise, they note two sets of antennae rise up behind the boulders ahead. The ant men wait for the party to attempt to pass through the path between boulders, whereupon they strike with their spears. The creatures use their bites and stings if the characters bypass the boulders. The ant men call for reinforcements from Area 2, if need be.

Treasure: If the heroes search the skeletons’ remains and make a successful Notice check, they recover 6 silver pieces. On a raise, 3 gold pieces are found sewn in a pouch beneath one of the skeletons. Their armor is of very poor quality, and their swords and daggers are rusty from lack of use. The skeletons belong to militia from a village to the west, which was recently overrun. The survivors have been subjugated and taken to the ant men’s city.

2. If the ant men from this area have not joined the others in Area 1, then five remain here. They are picking over the body of what appears to be a laborer, perhaps a farmer from one of the neighboring villages.

3. The five ant men in this cavern are resting before having to return to scouting or guard duty. Stealthy characters can likely get the Drop on them. Their leader is, however, wide awake in Area 5 beyond, and he may be alerted to the noise of combat.

4. Three ant men are gathering water in pails from the small pond inside this cavern. Their leader assigned them “worker” duties after they failed to capture any meat from their earlier scouting trip. Because the ant men are absorbed in their tasks, they suffer –2 to any Notice rolls.

5. The leader (a Wild Card with the Level Headed Edge) resides in this chamber. He has placed the children (Aylena and Carston) in the northeast corner of the cavern to keep an eye on them. They are not bound, but they fear the ant man, and so huddle together, afraid to move—lest they become his next meal.

Treasure: Upon searching the leader’s body, on a successful Notice check (at –2), the party finds a small pouch containing a jade amulet. The pouch was carefully secured into an overlapping piece of the creature’s carapace.  The amulet contains gold inlays depicting unusual symbols. A successful Common Knowledge or Knowledge (History) check notes the piece is indicative of an ancient civilization called the Narunari (or other appropriate civilization in the GM’s world), who once ruled this region. On a raise, the heroes note the symbols denote that the amulet’s owner was royalty, and knowing the ancient race buried their royal dead with their possessions—often including their slaves—they may correctly surmise the ant men have stumbled upon one or more treasure-filled tombs while expanding their hivelands. The amulet is worth 500 gp as jewelry alone, but would fetch three times as much from a collector.

The ant men stand 6 ft. tall and wield spears. They have carapace-covered, humanlike torsos, and they walk on four of their six appendages. They are quite intelligent and militaristic. Ant men live in hive cities, with entrances like mounded hills, just like mundane ants. The creatures have a caste society, which includes soldiers, workers, taskmasters, and the queen. Soldiers fight to the death; it is their role to forfeit their lives for the good of the hive or in performance of the queen’s tasks.

12 thoughts on “No Picnic for Heroes”