Skip to content
Home / Delve into the Depths in the Kobold Blog / Warlock’s Apprentice: On the Hunt 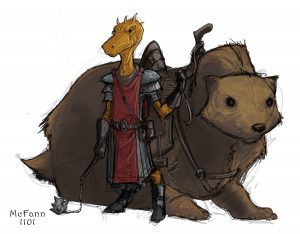 Bounty hunters are a diverse group, spanning a variety of personalities and skills. Some are brutes, choosing the life of the Champion (fighter) while other clever mercenary leaders prefer more tactical maneuvers. Many emulate the Hunter (ranger) and train tirelessly in order to track their quarries to the ends of the earth. Others still are wizards that study the School of Divination to scry upon their targets and strike from afar.

One such possibility is this new subclass, the Oath of Justice, which empowers paladins to overwhelm and incapacitate their foes in the name of the law.

The Oath of Justice is a commitment not the tenets of good or evil but a holy vow sworn to uphold the laws of a nation, a city, or even of a tiny village. When lawlessness threatens the peace, those who swear to uphold the Oath of Justice intervene to maintain order, for if order falls to lawlessness, it is only a matter of time before all of civilization collapses into anarchy.

While many young paladins take this oath to protect their country and the people close to them from criminals, some older adherents to this oath know that what is just is not necessarily what is right.

All paladins of justice uphold the law in some capacity, but their oath differs depending on their station. A paladin that serves a queen upholds slightly different tenets than one that serves a small town.

Uphold the Law. The law represents the triumph of civilization versus savagery. It must be preserved at all costs.

You gain oath spells at the paladin levels listed.

When you take this oath at 3rd level, you gain the following two Channel Divinity options.

Tether of Righteousness. You can use your Channel Divinity to bind your target to you. As an action, you extend a line of crackling energy toward a creature you can see within 30 feet of you. That creature must succeed on a Dexterity saving throw. On a failure, it is tethered and cannot move more than 30 feet away from you. While tethered, the target takes lightning damage at the end of each of its turns equal to your Charisma modifier. You can use your action to make a Strength check opposed by the tethered creature’s Strength check; on a success, you can pull it up to 15 feet toward you in a straight line.

As an action, the tethered creature can attempt to make a Strength check against your spell save DC. On a success, it breaks the tether.

At 7th level, you have bent the laws of magic to parallel the laws of your civilization. When you reduce a creature to 0 hit points with a spell, you can knock the creature out instead of killing it. The creature falls unconscious and is stable.

At 7th level, all creatures within 10 feet of you must spend 1 extra foot of movement for each foot they move. If a creature ends its turn in this area, it must succeed on a Wisdom saving throw or fall prone. Creatures that are immune to being frightened are immune to this aura.

At 18th level, the range of this aura extends to 30 feet.

Starting at 15th level, once per turn when you deal radiant damage to a creature, it must make a Constitution saving throw. On a failure, it is restrained until the end of its next turn.

At 20th level, you can take on the appearance of justice itself. As an action, you become wreathed in a garment of cold light. For 1 minute, you benefit from the following effects:

Once you use this feature, you can’t use it again until you finish a long rest.

Read more on bounty hunters—and read other great articles—in Warlock, only on Patreon!

2 thoughts on “Warlock’s Apprentice: On the Hunt”