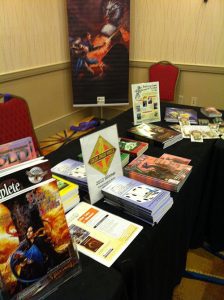 The kobolds descended upon PaizoCon 2012 and made it their temporary home away from home for a few days. In the gallery we’re presenting, you can see a few of the kobolds hard at work, plus some fun mittens, and the all-important booth! Wolfgang and Adam ran games, various kobolds manned the booth, and a lot of fun was had by all!

If you made it to the show and stopped by (or played in a game with one of the kobolds!), many thanks! You’ll see some shots of Wolfgang running Matthew Stinson’s adventure, “Into the Boiling Bay,” plus a few images of the art Chris McFann did for the rum gremlin from Journeys to the West. Adam Roy also took intrepid player characters on an adventure, as you’ll see, and you have to take a look at the mittens that Judy Bauer crafted that depicted Baba Yaga’s Hut! How neat is that? We also see the adorable Little Kobold. Awww! Plus a glimpse at world-building, what we’re sure was a modest proposal, a TPK in the offing, and more! Just click on an image below to see a larger version of it.