Skip to content
Home / Delve into the Depths in the Kobold Blog / Prepared!: Upon the Icebound Terrace 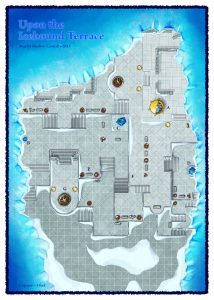 Cartography by Meshon CantrillWe left Gorol’s Outpost and went north for several days. The weather held, and we counted our blessings. We’d heard stories of the place and had it in our hearts to find those ruins. Vladimir had a map we’d bought from some locals; they said it was as old as some words—whatever that meant. It was early evening when we saw the crack in the glacier. We went single file through a long tunnel that opened up into a valley. At the end of the valley, we saw it: a stone terrace partially encased in ice. We made camp with the intention of exploring the ruins in the morning. What came for us just before dawn, I cannot say, white wings and cruel faces—laughter . . . I fear I am the only one left alive.

Upon the Icebound Terrace is an explorable fifth edition location designed to offer a hard challenge to four 6th- to 7th-level PCs.

Oithois the exceptional ice mephit and his foul underlings have uncovered a powerful relic at the entry to ancient ruins. The monstrous mephits seek to crack a hole between the material plane and its icy homeworld by using this machine, then lead an army of elemental lackeys and conquer the civilized outposts of the north. PCs are approached by a frostbitten traveler, who pleads with them to assault the terrace. PCs must mount an attack against the mephits, contend with an unintentionally summoned young white dragon, and defeat Oithois upon the icebound terrace.

Stranger with a Tale

A stranger named Jom appears in a northern town or city desperately seeking adventurers. He is a short man with pale skin and squinting eyes. He explains that his exploration party discovered ruins buried in a glacier. They decided to make camp for the night and explore the ruins in the morning, but were attacked just before dawn; cackling monsters on frosty wings murdered or captured his companions. Before he escaped, he saw a stone terrace rising up out of the snow: an ancient machine glinted from the topmost level.

He provides the following information:

A DC 13 Wisdom (Perception) check reveals he is ill. If pressed, Jom shows his injury. A massive laceration in his leg shows signs of a strange infection. A DC 10 Wisdom (Medicine) check uncovers the injury’s magical nature. A DC 15 Intelligence (Arcana) check suggests Jom is slowly turning into an ice mephit. The only cure is to pour the melted remains of his attacker’s clawed finger over the injury. Jom offers 100 gp to save him.

Oithois the Bigger than Average Mephit

Oithois has the following bonuses owing to his large size: +1 AC, +2 HD, +1 hit/dmg to all attacks. Creatures struck by his claw attack must make a DC 12 Constitution saving throw or suffer from rime disease. Victims of rime disease lose 25 percent of their movement speed immediately and 25 percent per day for three days. On the third day, the victim transforms into an ice mephit. The disease may be cured with a cure disease spell, or by pouring the melted remains of Oithois’s claw over the wound.

On the topmost platform (A) is an ancient machine capable of opening gates to other planes. The machine still functions. Operating the machine requires a DC 18 Intelligence (Arcana) check. Once activated, energy from the crystals located on the terrace arcs into the machine for 1 round. After 1 round, the machine opens a gate to a random plane for 1 minute. The gate appears within 10 ft. of the large dead tree at G. It is possible to open a gate to a specific plane provided the following conditions are met:

Used to energize the planar device, the crystals on the terrace hum audibly. These translucent white crystals radiate magic. Contacting a crystal while it is energizing the machine initiates a DC 14 Constitution saving throw to avoid being stunned for 1 round. The crystals can be destroyed (AC 10, hp 10); a destroyed crystal cannot power the machine. The crystal at C has a small, removable crystal set into its base. A DC 15 Intelligence (Arcana) check reveals its function as a lantern of revealing.

PCs’ Arrival at the Terrace

A frosted stone terrace rises from the snowy ground and ends several storeys up at a large door. A myriad of staircases provide access to elevated platforms; other regions of the terrace are locked behind massive walls of ice. Crystals, mounted in stone receptacles, pulse and hum in the cool air. A great bronze-colored machine sits on the topmost elevation; a spindly white figure hunches near the machine—its long and wicked face regards you.

The mephits at E and F attack the party. Oithois remains by the machine and works frantically to activate it.

Depending on your playstyle, use this section as a round-by-round breakdown, or a loose narrative sequence; vary the events to suit the players’ actions.

When the gate opens, a young white dragon named Halicix falls through. He is entirely surprised by his journey and is quickly enraged. He begins by using his breath weapon on the largest clump of creatures. He has no affinity to the mephits and happily freezes them to death. Once Halicix attacks, the mephits use their turns to flee. Oithois, frenzied at being thwarted, stays and continues attacking the party until slain.

Bargaining With Halicix. Halicix is understandably angry. A determined PC can halt the brute’s aggression long enough for a short exchange. Two DC 15 Charisma (Persuasion) checks combined with a cessation of attacks stops Halicix from attacking the party for 1 round. Assign further checks or a roleplaying challenge to determine if the party convinces the dragon they are not to blame for his unplanned jaunt to the material plane. Keep in mind that white dragons are more beast than not, and an offering of something valuable may be required.

The round before the gate closes, on initiative count 20, a blast of powerful wind from the frozen world beyond blows over the terrace. The blizzard has the following effects:

The stands containing the crystals have a total of six small diamonds (100 gp each) set into their rims. Removing a diamond requires a DC 12 Dexterity (thieves’ tools) check. A failed check results in a loss of 25 gp value for each point the attempt missed by (for example, a roll of 10 would reduce the value to 50 gp).

Here are a few suggested story arcs stemming from this location:

Author’s Note: This is the final location/encounter in this series of Prepared! articles. Thanks to Miranda and the rest of the warren for the opportunity to publish these campaign boosters. Thanks also to Meshon Cantrill for the maps and illustrations. Game on!

1 thought on “Prepared!: Upon the Icebound Terrace”