Skip to content
Home / Delve into the Depths in the Kobold Blog / The Egg Thief: A Sidetrek 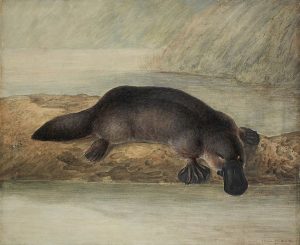 While visiting a provincial festival, an eccentrically dressed man wearing a leather helmet and goggles approaches the PCs. His name is Halm Hogarth, and he takes the PCs aside, saying he needs their help with an investigation. A large number of chicken eggs have disappeared from several farms east of town. Worse, he is also missing two hippogriff eggs.

When the PCs arrive at the hamlet, they meet a group of frustrated chicken farmers. Wild rumors and accusations abound as to the missing eggs. They suspect one another and also the Hogarths (who are relatively new and keep to themselves). Everyone is scared by the mysterious disappearances. They have no concrete evidence to go on.

Halm and his family are exotic animal breeders, specializing in hippogriffs. They currently have a breeding pair and a one-year-old hatchling. Halm keeps the animals on his ranch five miles from the nearest farm (for safety and to prevent foolish locals from snooping on his valuable beasts). A week ago, his female hippogriff laid a clutch of two eggs. A day later, they were gone. Nobody saw the thief, and the only clue was a strange, clawed footprint near the scene. He wants to keep the missing eggs a secret to avoid damaging his reputation and asks the PCs to help find them as soon as possible. He will pay 200 gp in gold dust for each egg safely returned.

Halm makes a rough drawing of the footprint in the dirt. “It must have been smaller than a man but larger than a dog. I don’t know where it came from, but it couldn’t have been from anywhere nearby. I’m guessing it was lurking in the woods to the east. No one goes there except the occasional hunter.”

If the PCs follow the lead, they have two encounters in the forest: a pernicious owlbear and a pair of pernicious hippogriffs. You may throw in a couple pernicious chickens along the way for flavor.

The pernicious platypus lives deep in the woods in an ancient quarry pond next to a small hillside. The pond measures 40 ft. wide with sheer walls (2 ft. on the near side and 10 ft. on the other) and a water depth of 60 ft. Fed by an underground spring, the water brims over one edge and trickles down into a nearby creek. On the opposite side, heavy brambles conceal a watery cave where the platypus sleeps during the day (DC 30 Perception to reveal from across the pond). However, if they seek an entrance by water, a DC 20 Search reveals a cave entrance just above the surface. The cave height is just over 6 ft. with a slippery bottom, and the whole lair is filled with 3 ft. of water (see environment rules in Pathfinder Roleplaying Game: Core Rulebook), making it rough terrain for Medium creatures without a swim speed. Fortunately for the platypus, she and her brood all have swim speeds. The passage goes back 15 ft. before opening into a 30-ft.-wide, 8-ft.-high chamber. There the platypus sleeps in the daytime along with her brood: a pernicious chicken swarm.

Amongst the litter in the platypus’s lair is found a gilded ornamental egg fit for a king worth 1,500 gp. How she acquired this treasure is a mystery.

Halm is disappointed the party could not recover the lost hippogriff eggs, but he can try for more next year. He offers them 50 gp for their trouble. The other ranchers in the area are amazed and relieved by the story and collectively offer as many eggs as the party can carry in thanks for their help.

Word gets around that the PCs are capable adventurers. They can expect to be contacted by the local Burgomaster for future contracts. 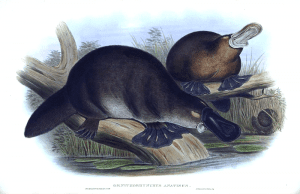 Perched upon a helpless goat, a green-furred creature with a black beak and terrible red eyes pauses from feeding and glares back at you maliciously. It has six–fingered, webbed claws and a red crest running down its back. You blink your eyes in unbelief, and the creature has vanished!

Brood sack (Su) Pernicious platypuses have a marsupial pouch where they keep eggs they collect from other creatures. The brood sack is supernaturally extradimensional being capable for example of holding dozens of chicken eggs or a single egg from a Large creature, such as a griffon or owlbear. Therein, they incubate at an accelerated rate and emerge as a pernicious creature or “broodling” (see template).

Electrolocation (Ex) While underwater, platypuses can sense the tiny electrical currents that trigger muscle movement. This allows them to locate living prey and to distinguish it from inanimate objects. Treat electrolocation as life sense with a range of 30 ft.

The creature’s primary activity time is crepuscular: sleeping for long periods during the day and being most active at twilight. Pernicious platypuses are carnivorous, feeding primarily on blood, meat, and milk. However, they also have a strange fetish for poisonous plants and graze regularly wherever they find them, with a particular fondness for deadly nightshade. They sometimes feed on small mammals, such as sheep by night, paralyzing them with their venom and suckling on their milk and blood. They are insidious and squirrely, preferring to lurk in the shadows and avoid combat, leaving the fight to their broodlings while they escape. Pernicious platypuses are driven by a mysterious obsession: pilfering eggs from other creatures by night and returning to its lair to incubate them. Once hatched, they suckle on the platypus’s strange milk secretions as it slumbers during the day. Small and larger broodlings doggedly follow the pernicious platypus on nightly “hunts” for fresh meat. Once fully grown (within 1d4 days), a broodling will hunt on its own but remain nearby the platypus, which it sees as its “mother.”

5 thoughts on “The Egg Thief: A Sidetrek”