Skip to content
Home / Delve into the Depths in the Kobold Blog / Monday Monster: Flicker Monkey 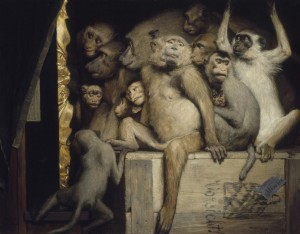 In a clearing dominated by an enormous tree, a pair of large monkeys sat lazily on a branch until they noticed three men entering the clearing. They shrieked, and the men, seasoned warriors all, ignored the warning and approached the tree. The monkeys dropped to the ground and ran towards these new foes, who drew their swords and prepared to cut down the aggressive creatures. As the monkeys launched their attack, they flickered in and out of reality and delivered vicious bites to the hapless men. After two of the warriors lay dead and the remaining man fled, the victorious animals searched through their victims’ backpacks and grabbed all the shiny items. After a week, the bodies faded from existence, while the survivor faced the terrifying aftereffect of his encounter as his arms periodically disappeared for minutes at a time. Then his legs. Finally, he just winked out for good, leaving nothing but a pile of clothes…

Flicker monkeys, also known as blink monkeys, are not naturally occurring creatures; rather, they were created. No one knows who it was that experimented on these creatures to transplant the abilities of a blink dog into a simian. All that matters is, like many lab monkeys, a few escaped into the wild and now spread a disease that causes its victim to fade from reality.

SPECIAL ABILITIES
Flicker (Su) As a free action, a flicker monkey may use blink as the spell (caster level 8th).

Disease (Ex) Flickering Phage: Bite or thrown object—injury; save Fort DC 14; onset 1d3 days; frequency 1/day; effect 1d3 Con damage and the victim must make a Will saving throw (DC 14) at the first stressful situation of the day (such as combat)—failing the save results in 1d6 (+1 for every point of Con damage inflicted by the disease) rounds of uncontrollable flickering for the victim, who benefits from the blink spell; however, he can only hit opponents 50% of the time and has a 20% chance, each round, of dropping a held item; cure 2 consecutive saves. The save DCs are Constitution-based. A victim reduced to 0 Con from this disease leaves no body, fading from existence.

A flicker monkey is slightly larger than a typical monkey and has patches of silver-gray fur. The creature is normally docile, but anyone who threatens its territory and ignores its warning shrieks is the target of thrown objects (rocks, feces, or anything else at hand) or vicious bites.

Flicker monkeys, as an accidental creation, have no particular ecological niche, but their disposition limits the spread of flickering phage to predators who insist on preying on them. Other than the potential threat the disease poses, flicker monkeys are no different from normal monkeys and mingle freely with them. When a flicker monkey mates with one of its normal cousins, 25% of the offspring will also be flicker monkeys.

Occasionally, evil followers of death or disease gods seek out flicker monkeys to capture and then release into large population centers. These nihilists view contracting flickering phage as a sign of favor from their gods, so they do not concern themselves with protection from the disease.

(Based on an idea suggested by the monkeytastic Patrick Curtin.)