Skip to content
Home / Delve into the Depths in the Kobold Blog / From the Archives: A Deep Dive for Hidden Lore 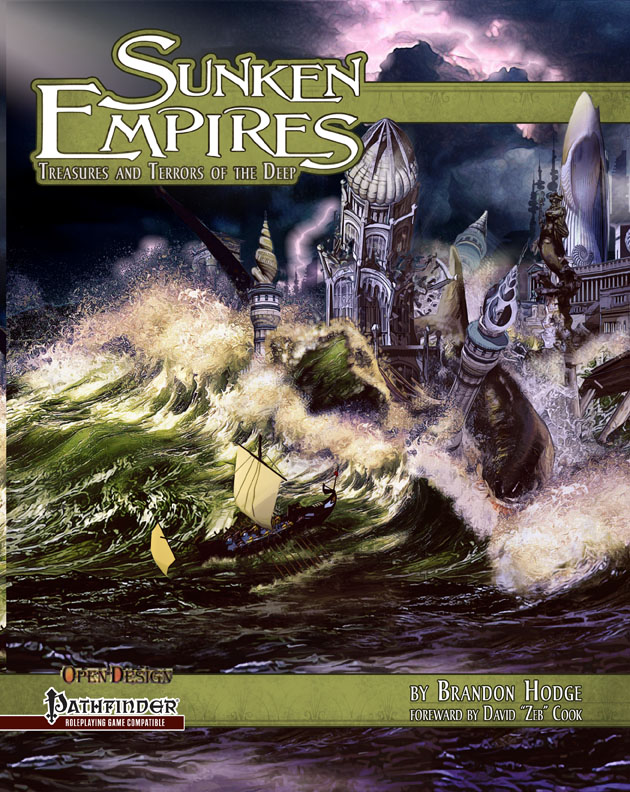 Welcome back to From the Archives where we look at older Kobold Press offerings, most written for other systems or previous editions, that contain jewels of great lore for your 5th Edition games. For our second outing, we’re going to examine an early tome that positively drips with exciting ideas.

I’m talking about Sunken Empires by Brandon Hodge, one of the earliest of Midgard documents. As Head Kobold Wolfgang Baur explains, “This was the third in the Gazetteers line (the first was Zobeck for 3.5E and then Ironcrag Dwarves for 3.5E as well). These are effectively the origin products for Midgard, though I was just calling it Midgard at the time and no Midgard logo yet existed.” There you have it. This is almost pre-Midgard Midgard, which is more than apropos since our focus today is going to be on ancient civilizations and lost cities. In short, we’re taking a deep dive into the past of the world, both in Midgard chronology and Kobold Press history!

Sunken Empires features 77 pages of content written for the Pathfinder Roleplaying Game. It opens with an introduction by David “Zeb” Cook, reminiscing on his creation of the aboleth (which first appeared in a TSR adventure called Dwellers in the Forbidden City), and then it leaps into an overview of sunken cities from myth and legend. Here Hodge provides some very informative summations of where the mythos of Atlantis, Mu, and Lemuria originated. He details what was known about them at the start and takes us through the major players—the psychics, charlatans, and cultists—who added to their lore over the years. I learned a lot myself from this section, particularly about the way that Mu and Lemuria built upon Atlantean myth for their own pseudo-histories.

This is followed by a discussion of new underwater races and characters for the game, spells and magic, new creatures, adventure hooks, aquatic equipment, lost technology, spells and magic items, and suggestions for playing in “the sunken environment.” But what’s the most exciting for me, as a 5E GM and a Midgard fanatic, is the last bit of chapter one, in which Hodge shows how a GM can take inspiration from Atlantis and other “real world” sunken cities and create their own lost kingdom. By way of example, he creates the Lost City of Ankeshel and the modern settlement of the Twin Cities of Cassadega that grew up alongshore of its ruins.

Now, Ankeshel and Cassadega are both names that are scattered throughout the Midgard Worldbook. The opening “Overview and History” has three paragraphs on the Rise and Fall of Ankeshel and the “The Wasted West” chapter has a writeup on the city of Cassadega under the section on the Magocracy of Allain. There, we learn that Ankesh was an island in the western ocean blessed with copper, iron, and orichalcum ore. The humans there mastered a primitive form of science-magic called vril, but eventually their civilization was destroyed. Several theories as to the cause are presented, including that it was destroyed by aboleths, krakespawn, the children of Caelmarath, the servants of Nethus, the sahuagin, or the leviathan monster known as the Isonade. However it fell, the civilization ceased 3,000 years ago, but some 90 years from the present date, the ruins of Old Ankeshel were found just off the northern coast of Allain by patrols from Tintager. Scholars flocked to the area, but when the tomb of priest-king Thalassos IV was found beneath the waves, along with a working Vril battery, the treasure seekers and magic hunters came as well, and a full-on city grew up. Now, people search for functioning vril weapons, orichalcum ore, magical glyphs, and a way to decipher the impenetrable Ankeshelian language.

That’s all wonderful material. Great lore with some baked in hooks. But if you want to drill deeper beneath the waves then you’re going to need Sunken Empires. It’s there that we learn that the city wasn’t an island but a coastal town along a rich river delta. We discern the role that the aboleths played in the actual founding of the city, the way they bequeathed magical power and even immortality upon the city’s elite. We hear of the people’s growing discontent and mounting resistance to their puppet rulers and the subsequent rebellion, the war against the aboleths, and how the aboleths eventually brought down the city. We also learn that Cassadega isn’t one city, it’s the Twin Cities of Cassadega, because a city of merfolk now exists just off the shore, trading with its sister city above the waves. And then there’s the Brink, a deep underwater trench that even the merfolk fear to explore but from which guttural calls echo and out of which strange monuments sometimes rise. Sunken Empires also describes the forgotten origins of merfolk and details the way in which the secret of the Ankeshelian language might be cracked at last. What’s more, there’s a gorgeous map of the Twin Cities of Cassadega drawn by none other than cartographer Jonathan Roberts (who would go on to be the cartographer for George R. R. Martin’s Westeros setting). The map and the added lore are intriguing and really flesh out the details a GM would need for an adventure in Cassadega.

Part of that lore is that the aboleths transformed unfortunate beings sacrificed to them, and when the city rebelled against their rule, they sent those same beings out of the water as ulat-kini, “emerging from the waves and leaping over the orichalcum walls of the city.” Of course, the ulat-kini are a Pathfinder race. For your 5E game, you could substitute sahuagin easily, or if you want, you could use this very handy conversion that Rich Howard did for Tribality in his article “50 Aquatic Enemies for 6th–10th Level Characters.”

Going a step further, you can also build on the Ankeshel/Cassadega lore with a more recent offering from Kobold Press. The vril technology that Hodge describes (some of which appears again in the Midgard Worldbook) has been expanded in Warlock #10: The Magocracies. The final chapter, “Amidst the Dust: Hardy Survivors and Lost Relics” by Dan Dillon, details Ankeshelian Relics, including four types of vril batteries (with information on their cost, weight, and number of charges), Ankeshelian armor, a vril shield, and vril-powered vehicles and weapons. These artifacts might be found for purchase in Cassadega, or they might be discovered in yet unplundered ruins beneath the waves.

So while you’d be fine just going with what’s in the Worldbook, if you wanted to dive back into the past for more detail in Sunken Empires and combine that with the information on vril technology in Warlock (as well as the added lore therein on the Wasted West, Bemmea, and Tintager), you could spin quite a campaign about exploring ancient ruins for forgotten magics and arcane sciences, tying in the forgotten origins of the merfolk, the quest to resurrect a dead language, lurking ulat-kini, and perhaps even the returning threat of an ancient foe, the aboleths. If so, the final entry in Sunken Empires, “The Ecology of the Aboleth,” may be of assistance to you. Did you know that the monsters grow cities out of coral? Or that they cannot abide orichalcum? With a little tweaking, the optional rule Orichalcum Warding is going in my game. When you read Sunken Empires, you’ll want it in yours as well.

Lou Anders is the author of Frostborn, Nightborn, and Skyborn, the three books of the Thrones  & Bones series of middle grade fantasy adventures, as well as the novel Star Wars: Pirate’s Price. You can find out more about him and his works at www.louanders.com and visit him on Facebook and on Twitter @LouAnders.

4 thoughts on “From the Archives: A Deep Dive for Hidden Lore”