Skip to content
Home / Delve into the Depths in the Kobold Blog / Trap Themes (Part 4 of 5): Daemonic Implements 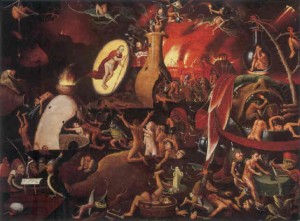 Few places inspire as much terror as the burning cities of the Hells and the infinite yawning layers of the Abyss. Some trade in stories of demons and devils to spur righteous obedience; others do so as a warning to those who might pass beyond the wall of mortal existence in search of adventure.

In either case, the realm of demons is not simply chaotic—it is chaos incarnate. It is the collective nightmare of a thousand peoples protected by gods who themselves fear the screeching, keening mouths of those that dwell at the bottom of the multiverse…

The daemonic implements trap theme allows you to flavor classic traps, so they feel native to the scorched hellscapes, churning flesh warrens, and wrought iron fortresses that demons and devils call home. Dart traps might be re-skinned to fire screaming skulls, enervating bone thrusts upward from the floor rather than spears, and pit traps become slobbering maws that open beneath the feet of the unwary.

Traps with the daemonic implements theme emphasize high damage attacks, draining effects, and corruption. Parties with little to no healing will struggle to overcome most daemonic implements; conversely, adventuring groups with an abundance of healing may easily manage traps with this theme.

Skill Modifications: Increase Perception DCs by 4. Additionally, a character can detect and identify a daemonic implement with an Arcana or Religion check (hard DC).

Veins of cerulean lightning split and flash across the hissing brimstone surface of this trap.

Traps with this trait reflect the most dreadful and iconic features of the mighty balor. Use baloric traps in confined encounter areas, or on traps that can move (such as rolling boulders).

A cloud of billowing ash and vaporous bile lingers in the wake of the trap’s attack, spoiling the perishables in your backpack in mere seconds.

Befouling traps are most threatening to adventuring parties that rely on potions and elixirs for healing and other extraordinary abilities.

Befoul (poison) • At-Will
Trigger—The trap hits with an area or close attack.
Effect (No Action)—One potion or elixir the target is carrying (target’s choice), including those stowed away, becomes poisonous until the end of the encounter. Creatures that drink befouled substances take 10 poison damage/tier, lose 2 healing surges, and are weakened until the end of their next turn.

The attack wreathes your body in icy black flames that consume your life force as a campfire consumes air.

This dangerous power is most effective against groups with an abundance of healing abilities.

Blackfire (cold, reliable, necrotic) • Recharge 4, 5, 6
Trigger—The trap hits with a melee or close attack.
Effect (Immediate Reaction)—The target is affected by blackfire (save ends). While affected, the target takes ongoing 5 cold and necrotic damage/tier. In addition, whenever the target spends a healing surge to regain hp, it is treated as if it had just failed a death saving throw for the encounter.

This trap is forged not from wood or iron but rather from splintered bone wrapped in bubbling sheets of raw skin. The wounds it inflicts run deep, however, and the veins beneath its flesh soak in your blood.

Apply this power to any trap that acts alongside powerful demons in an encounter, particularly brutes and soldiers who take the manticore’s share of damage each turn.

Apply this trait to traps that attack with a weapon or damaging appendage, such as a statue.

Weapon Dance • Recharge 5, 6
Trigger—The trap is missed with an attack roll, or a creature fails a skill check to disable it.
Attack (Opportunity Action)—The trap attacks six times with a melee at-will power.

The wound oozes with blackened ichor that hardens like molten rock, searing your flesh and muscle from within.

Don’t overuse this deadly and versatile power—aim to drain enough hp to where the dungeoneers feel the pinch, but not so much that they are entirely unable to heal.

The spatters of dried blood coating this trap bring out the intricate patterns etched on its surface.

Apply this trait to traps that make frequent melee attacks against defenders and other tough dungeoneers. Parties with several elves, eladrin, or deva are particularly devastated by this trait.

Vorpal Cold Iron
Melee attacks made by this trap are high crit, ignore resistances, and deal an extra 2d12 damage/tier on a critical hit. If the target is fey or immortal, the trap scores a critical hit on a 19–20, and the extra damage increases to 3d12/tier.

The following sample trap was made by applying the blackfire power and the marilithic and vorpal cold iron traits to the giant warrior statue trap.

Level 4 Elite Trap (XP 350)
This 20-ft.-tall statue of a marilith is bathed in flames the color of midnight. It wields a curved falchion in each stony hand, the shimmering blades frosted with runes.

Vorpal Cold Iron
Attacks made by the dread marilith statue trap are high crit, ignore resistances, and deal an extra 2d12 damage on a critical hit. If the target is fey or immortal, the trap scores a critical hit on a 19–20, and the extra damage increases to 3d12.

TRIGGERED ACTIONS
Blackfire (cold, reliable, necrotic) • Recharge 4, 5, 6
Trigger—The dread marilith statue trap hits with an attack.
Effect (Immediate Reaction)—The target is affected by blackfire (save ends). While affected, the target takes ongoing 5 cold and necrotic damage. In addition, whenever the target spends a healing surge to regain hp, it is treated as if it had just failed a death saving throw for the encounter.