Skip to content
Home / Delve into the Depths in the Kobold Blog / Book Review: Falling Sky by Rajan Khanna 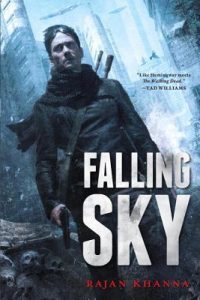 A disease turned most of the world’s human population into ferals two generations ago. Most of the folks who survived took to the skies to get away from the highly contagious bug. They have taken to the air in dirigibles and airships, but, like all birds, occasionally they must land to forage for supplies and when they do the threat of ferals is omnipresent. Ben Gold inherited his ship from his stoic and practical father who taught him how to survive, and survive he has. To do so, he has teamed up with a group of scientists who are looking for a cure to the bug. At the same time, there is a resource- and power-hungry city that will stop at nothing to achieve its goals. While defending the scientists, Ben has his ship stolen and now not only must he learn to survive on terra firma, but he also must find a way to get his ship, the only home he has ever known and his strongest tie to his beloved father, back.

First the book is called Falling Sky, not to be mixed up with the television series Falling Skies. No aliens here, but plenty of ruined stuff. This book is what would happen if Woody Allen piloted an airship in a post-pandemic world. Now don’t let the Woody Allen thing scare you away—hear me out. Like Woody Allen, Ben worries about a lot of things: his ship, ferals, the bug, the ground, not being in the air, the scientists—you name it, he worries about it. His worries are founded; however, his constant worrying rivals Allen’s characters’ in many of his movies. Keeping with the Woody Allen comparison, Ben says or does the wrong thing almost always with women. I almost forgot: like Allen’s characters, Ben seems to jump from one out-of-control situation to another.

I was worried that this would be another one of those almost-a-steampunk/zombie novels, but even with the proximity to these very popular themes, Khanna kept things feeling original and not overplayed. People who are expecting a steampunky story or a zombie crawl will be disappointed. The airships involved in this seem like steampunk ones but they really are not. If you are a fan of steampunk airships then check out Falling Skies. As far as the ferals go, they are much like fast zombies, but they are not mindless and it is that primal intelligence that makes them a bit more frightening. It is easy for me to see zombies in movies and books as creatures, but the ferals in this story are very much human and that always complicates things.

This isn’t a long book, but with the paperback version coming in at 258 pages, it was just right. This is the kind of book you can easily finish in a weekend and still have time to play your favorite RPG. Minus all of Ben’s worrying, there was just the right amount of all of the things that make an action book fun to read: airship combat, gun fire, people stealing stuff, romance, ill-conceived plans—you know, all of that stuff. The bad guys are bad and the good guys are good enough. Like all humans, Ben and his companions have their faults and predictably those faults get amplified and end up complicating the story.

Falling Sky is like a good slice of pizza: Sure there are plenty of different pizzas out there and even slices that seem the same, but oh the joy you feel when you get that one slice that is just right. There are some small problems with this book, but in the grand scheme of things they are not big enough to keep this book from being what it is. I want to say this book is a bit like a long short story that makes you glad it is as long as it is, but the structure of this book keeps it from that category. Falling Sky has an interesting setting that is combined with a nice balance of story elements that makes stories like this enjoyable. If any of the elements that I mentioned sound good to you, give Falling Sky and Rajan Khanna a chance.