Skip to content
Home / Delve into the Depths in the Kobold Blog / Behind the Curtain: Sunken Empires Nears Release 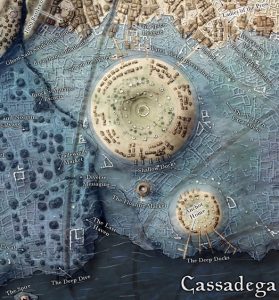 Why, you ask? There have been other patron projects, you say? That’s true, but they keep getting better. Each new patron project ups the ante. The patrons come back again and again, increasing in both number and talent. The sheer volume of ideas generated this time around could have powered a small moon.

Let’s bask now in the salty waves. In a moment, you’ll hear what three instrumental talents have to say about the project. But first, enjoy the gorgeous preview map created by Jonathan Roberts of a key location described within Sunken Empires. (And there’s some preview pages, too, after the jump.)

I asked Sunken Empires lead designer Brandon Hodge how he felt now that the project that he worked so long and hard on was wrapping up—of course, this was after his much-deserved rest from toiling for so long, chained in the kobold mines without sleep or… um…

BH: The lost city of Ankeshel has risen from beneath the murky waves and dark depths of the collective minds of the Open Design patrons, and the results are nothing less than the ultimate guide to exploring sunken cities and rediscovering bizarre technology long thought lost.

As Sunken Empires emerges from the depths of development, the results are spectacular. Lost cultures, sunken ruins, and ancient technology stand ready to finally slink from the sea, onto shore, and into the hands of anxious gamers, ink still dripping wet…

The design process behind Sunken Empires, from the initial brainstorms to the final art evaluations, has been immensely satisfying. I can’t imagine a more imaginative, hard-working creative force than the patrons who give life to the Open Design collective, and it has been my pleasure to guide them toward the completion of this incredible project. The results are astounding, and soon, you can see what all the fuss is about!

I also talked to Crystal Frasier, finalizing the layout and page design for Sunken Empires:

Q: Crystal, how did you go about designing the right look for this project?

CF: The design process for this book was thankfully very easy. Thanks to Aquaman and Muppet Babies, everyone has heard of Atlantis and Lemuria and has preconceptions about the look and feel of sunken cities. I just started leafing through my asset collections, thinking “Greek” and “seashells,” and pieced together a look based on that. Plus, I already had some of the gorgeous art from our illustrators—I just needed to find a look that complimented that. 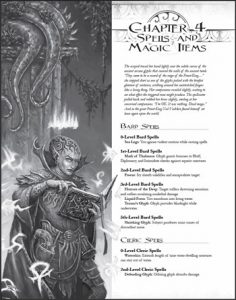 Q: Not sure how much of a gamer you are, but do undersea civilizations have any resonance for you?

I am a total, hardcore gamer. I go to bed dreaming up scenarios for my players. I watch movies and TV shows thinking “Wow… this would be an awesome campaign.” And one of my favorite gaming tropes, one that no one ever uses, is underwater adventuring. The problem in my group is a profound lack of solid rules and ideas to make it stand out as anything but normal adventuring with a few arbitrary penalties. But Sunken Empires includes tons of equipment and descriptions and spells that all revolve around surviving and adventuring underwater in true Republic-serial fashion. There’s a lot of crunch and a lot of fluff, and it’s the kind of high-quality writing you can show to your players to get them excited about something beyond the usual dungeon crawl. 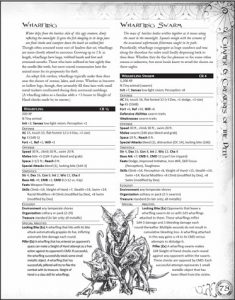 (The accompanying images are previews of Crystal’s wonderful page designs.)

That took care of the words and the pictures, so what was missing? Ah, the puppetmaster himself. I decided to storm the compound and pull back the curtain. What would the Wizard of Zobeck, Wolfang Baur, have to say:

Q: As Sunken Empires finishes, can you tell us why it’s important?

WB: It’s the first time that lost civilizations have gotten their own sourcebook—where Atlantis and Lemuria inspire the treasure, the character classes, and an entire coastal campaign. It’s also a perfect fit with the From Shore to Sea adventure from Paizo and demonstrates everything that can be done with forgotten treasures and lost civilizations. It’s all over movies and books, but the theme has not been embraced in gaming very often.

This patron project was the first Open Design/Paizo collaboration. Were there any significant new challenges or benefits compared to other patron projects?

Well, the patrons all got their names in a Paizo-published book and both the Paizo print edition of From Shore to Sea and the Open Design PDF for Sunken Empires for a great price. The challenge was mostly in the deadline: Paizo works far ahead of publication to produce, develop, edit, and lay out their books, so Brandon delivered that manuscript FAST. It benefited from lots of patron involvement and enthusiasm.

The downside was that the project was broken into two books, both an adventure and a sourcebook packed full with great material. It is always tougher to manage a two-book project than a single-book project, but in this case, I think they both turned out really well.

You had a unique perspective during this project. As project manager, you were responsible for connecting all the pieces, perhaps more so than with any previous patron project. What can you say about your experience at the nerve center, juggling so many flaming, saw-toothed, banana cream pies?

I wish there were more pie, saw-toothed or not. But fortunately I wasn’t alone.

It was a joy to see so much talent poured into Sunken Empires: David “Zeb” Cook, the creator of the aboleth, showed up to talk about his tentacled children; Brandon kept up the momentum even when the tide washed in; Stefen Styrsky brought lots of great crunch; and dozens of patrons all contributed monsters, spells, and items—and many a critical eye and plenty of sharp commentary.

The view from the center of this project is difficult to amass as just a single view. Art, editing, layout, all brought their advanced mode. The best collaborations are where the talent in one area inspires the talent in another. That’s what I saw happen here, again and again. It’s frankly the best sourcebook Open Design has ever done, and I’m proud to have contributed to it.

What is it that gets you excited about underwater adventuring? Why do you think there’s a place for Sunken Empires?

It’s a common misperception that Sunken Empires is about underwater adventuring. In my mind, it’s about Atlantean-style lost civilizations, and anyone who has ever thought that ancient, fallen ruins are inspirational for adventure will find it a great addition to their game, as player or GM.

And with that, we can only wait. But not long. Within days, you’ll be able to see the results yourself. Just stay tuned to KQ for the announcement.

6 thoughts on “Behind the Curtain: Sunken Empires Nears Release”