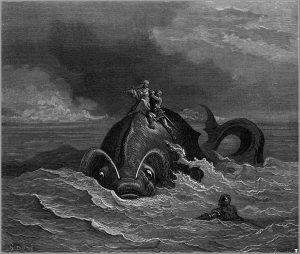 The alchemists and astronomers who associate the green planet Asaph with air, sea, and spirits are correct. Those who find serenity in its pleasant face are not. Asaph is a world of raw, tumultuous nature and primal magic, covered in roiling seas and raging storms. Such is its intensity that even the dead cannot dependably rest; gigantic water spouts sometimes spew ghosts and other incorporeal undead into the skies by the thousands, the ancient dead of civilizations long lost to the oceans. Even these spirits are eventually buffeted into ghostly bits (though not destroyed) by the winds, creating the necromantic haze that gives the planet its green hue.

Most of the planet’s intelligent inhabitants live deep under the sea in areas of relative calm, but hardy communities of sylphs and half-djinn have long eked out modest existences in the air and on rare dry land. Regularly besieged by tsunamis and hurricanes, to say nothing of malevolent elementals, sea monsters, and genocidal packs of invisible stalkers, these surface and air dwellers are a tough lot indeed. Forced into small, distributed communities by the archipelagos and floating citadels that they call home, these creatures find that managing communication across great distances is a matter of great importance. Over many generations, the bards called the tempest riders mastered the currents of the wind, and now they use it to share the songs and stories of their people across enormous distances.

On Asaph, tempest riders fulfill many traditional bardic roles as the historians and storytellers of their local communities. By casting their voices to the winds, tempest riders can maintain unity between communities separated for generations and coordinate action in times of emergency.

Ask the Wind (Su): At 1st level, a tempest rider may pay close attention to remnants of conversation, gossip, and chatter in the air and add his or her class level to all Knowledge (geography, history, local, nobility, and religion) checks and may make these checks untrained. This ability replaces bardic knowledge.

Bardic Performance (Su): Bardic performances work as usual, though a tempest rider may use his or her zephyr song ability to direct a performance with only audible components toward a single recipient at a distance.

Tempest riders have access to the following additional bardic performances.

Sky Treader (Su): At 1st level, a tempest rider can render his or her audience lighter than air with a song. This functions like feather fall and, at 6th level, like air walk. This performance has audible components and replaces fascinate and suggestion.

Bottomless Lungs (Su): At 18th level, a tempest rider may dramatically inhale the air from specific areas within the range of his or her voice. Used against a single opponent, this performance functions like suffocation and lasts no more than 3 rounds. Used against multiple opponents, each listener must make a Fortitude save each round that the performance is in effect or be stunned. The tempest rider may end this performance with a gust of wind as a move action if he or she chooses to. This performance may not be used in conjunction with zephyr song. It has audible components and replaces mass suggestion.

Zephyr Song (Su): At 2nd level, a tempest rider can speak to another individual at great distance. He or she does not need to know the location of the recipient, though the two must be on the same plane. Duration is 1 min./level and range is 1,000 feet per level. This ability may be used an additional time per day for every four levels after 2nd. Despite appearing to be singing or speaking, a tempest rider is silent while using this ability. This ability replaces well-versed.

Yonder (Su): At 5th level, a tempest rider can listen over great distances, as per clairaudience. Duration remains the same, 1 minute per level, but range increases to 1,000 feet per level. At 10th level, this ability expands to include clairvoyance. A tempest rider may use this ability one additional time per day for every five levels beyond 5th. This ability replaces loremaster.