Skip to content
Home / Delve into the Depths in the Kobold Blog / Out of the Frying Pan: Point and Counterpoint 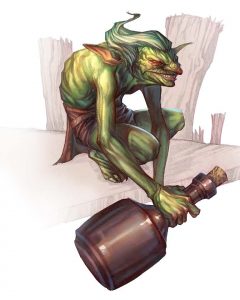 Triolo is a city renowned for opportunity, adventure, and intrigue. A hub of international trade and politics, her vast harbor is a swaying forest of creaking mastheads and wind-snapped canvas. Her tangled streets and alleyways resonate with a multitude of the languages, smells, and sounds of people, beasts, and industry from all across Midgard.

Pursuing leads—regarding “Lucrative maritime opportunities, benefits, profit sharing, and exotic travel await!”—PCs find themselves in the Saltmost district, a squalid, water-front ghetto sprawled amid the fog-damp shadows of Triolo’s great southern gate. Locating a dingy and crowded drinking hall near the wharves called the Broken Bollard, PCs proceed inside to inquire after one Donaldo Vaile, master of the Kammaean merchant ship Grey Gull.

The weathered, worm-chewed exterior of the Broken Bollard does not disappoint. Its interior is equally dismal. Crowded and oddly boisterous for the hour, the guttering torches and flickering table-lanterns afford little light. Fortunately, your future benefactor is easily spotted among the gloomy fisherfolk, dockworkers, and Illyrian refugees. Donaldo Vaile is handsome and fit, well dressed and well spoken. He is clearly out of place here although the scarred knuckles and notched scimitar in his sash show clearly that this is no “city-soft dandy.” After sitting for drinks and negotiations over a voyage from Triolo to Candano, the already-vigorous bustle of this rough-and-tumble establishment escalates. A commotion erupts down the bar and then shouting and shoving elsewhere, crashing pottery and fisticuffs near the kitchen door…

A successful DC 14 Wisdom (Perception) check allows a glimpse of one of four rum gremlins (see Tome of Beasts), lurking and cavorting in the smoke-hazed rafters above, and prevents PCs from being surprised. The gremlins and their Aura of Intoxication have already agitated this volatile situation, and now they whip things into a full-blown, magic-and-alcohol-fueled bar brawl (see Creature Codex).

While within range of a rum gremlin’s Aura of Drunkenness, the bar brawl’s recharge for Liquid Courage is 4–6. For more powerful PCs, the temporary hit points gained from Liquid Courage (2d6) can be multiplied by the number of rum gremlins within 20 feet.

The gremlins try to remain within 20 feet of the bar brawl, “feeding” it with their auras and keeping the “fun” loud and lively until their accomplices can complete Phase Two of the assignment.

Sometime (GM’s discretion) after beginning round two of combat, PCs are alerted to Donaldo Vaile’s newest plight. Amid the chaos, their would-be-benefactor has been overcome, and his senseless body is being drug away under the PCs’ noses. A trio of diminutive, hooded figures in tattered robes are making off with the incapacitated merchant-captain. By the time a PC raises the alarm, Donaldo’s bootheels are disappearing around the doorjamb.

At this point, any surviving rum gremlin will attempt escape through a window, down a drain, or out a stovepipe. Characters able to Disengage or otherwise disentangle from combat may give chase; otherwise the brawl goes on until “defeated” or until “dissipating” automatically 1d4 minutes after the last rum gremlin is slain or escapes. 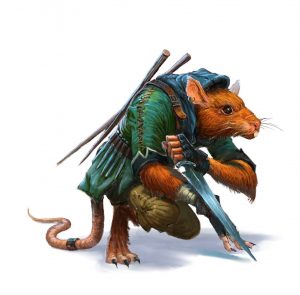 Tracking the kidnappers through the tide-washed tunnels is surprisingly easy. PCs can hear the faintly echoing gang members splashing and struggling with their burden down a nearby tunnel branch.

After several minutes, the tunnel splits again, one route sloping up to dryer footing. PCs approaching within 30 feet of the intersection are ambushed, four ratfolk mercenaries and any surviving rum gremlins lunge from concealed alcoves (disadvantage to detect, advantage on initiative). One ambusher (GM’s discretion) is armed with the blowgun which felled Donaldo (poison: DC 14 Constitution save or become paralyzed for 3d20 minutes; 2 blowgun darts remain). The ratfolk fight until dead.

Developments. Once the ratfolk are slain, survivors attempt to flee up the dry passage. PCs investigating will easily note drag marks and tracks, and a successful DC 13 Wisdom (Perception) check reveals a faint smell of incense and the sound of surf further ahead.

ENCOUNTER 3: I See Your Offer… 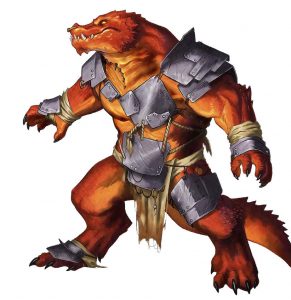 Developments. If PCs parlay, the elementalist reveals Donaldo as a longtime corsair, rebel, and war criminal whose plan was “undoubtedly” to shanghai PCs into his crew of plunderers and assassins. Explaining that as an enemy of the Mharoti Empire, Captain Vaile is of some value to maritime authorities there. Were PCs to cooperate, perhaps even join Norixias’s mission, much could be done by way of reward and valuable contacts and status within the Dragon Empire. A successful DC 14 Wisdom (Insight) check reveals the truth in Noriaxas’s words.

PCs accepting the dragonborn’s offer will before moonrise find themselves on a rowboat with their new associates beside them and Donaldo Vaile bound and squirming at their feet. The rowboat pulls for a small, darkened ship hidden nearby and soon bound for the Dragon Empire.

If the party is low level, GMs might revive Donaldo Vaile, using stats for city watch captain (see Tome of Beasts) or reduce the number of dragonkin.

If PCs win the day, returning with a revived Captain Vaile, he gratefully offers them a tidy reward and junior officer positions anytime they’re aboard “one of his ships” and teaches them secret signs that mark them as friends of the corsairs, granting the safe passage feature (from the Sailor background) for 1 year.

2 thoughts on “Out of the Frying Pan: Point and Counterpoint”