Skip to content
Home / Delve into the Depths in the Kobold Blog / Warlock’s Apprentice: The Burnished Grove 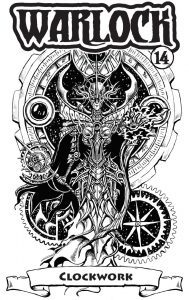 The Plane of Gears sprawled before her. The cog she stood on was a shining expanse of metal against a heat-shimmering sky, a blank ingot ready to be hammered, twisted, and formed. She smiled at the possibilities within such unmarred terrain. She hadn’t known before what this bare swath would be, but now, it could only ever have been set here for this purpose. Her work was never done, and that suited her just fine… there was so much left to do. This wonderful, winding, weaving world was vast and perfect, everything just where it needed to be—but with potential for so much more. She reveled in her industry and productivity.

Shaking her head, she admonished herself with a laugh that chimed and tinkled like a music box. Here she was, caught out daydreaming when there was work to be done. One last glance at the sky where the filaments of fate wound in an elaborate and precise weave that only she could see, and with a long, deep breath, she began…

Rava. Ariadne. The Gear Goddess. The Clockwork Oracle. Mother of Industry, Spinner of Fate, Merchant Goddess, Patron of the City of Zobeck, Patron of Weavers and the Gearforged… whatever mask she wears, hers is the Plane of Gears, an endlessly turning demesne of cogs and metal. Here, on a field of brass far from any civilization, lies the Burnished Grove. From a distance, the sprawling copse of trees seems an organic anomaly within this strange land of steam and machinery. But on closer inspection, the true nature of this forest is revealed: every tree, bush, leaf, and blossom are composed of hammered metal and inexorably turning clockwork.

The mechanical nature of the Burnished Grove often lulls adventurers into thinking the forest is benign and peaceful. But this is a forest like any other, and creatures live within the underbrush—but rather than beasts of flesh and blood, everything within the Burnished Grove, both flora and fauna, is a product of Rava and therefor built from clockwork. Beasts of metal stalk the shadows… birds composed entirely of feather-thin layers of silver and brass flit from branch to branch, chiming out their bell-like songs… even insects, wrought from impossibly tiny clockwork, crawl through the underbrush in the Burnished Grove.

The intricacy of the construction and the strange, pseudo-organic facade fascinates metalworkers, artificers, and tinkerers alike, but it also draws those who are more nature-oriented (such as elves, druids, and rangers) to its borders in order to study its strange, contradictory nature. Occasionally single-minded craftsmen can be found lingering on the outskirts of the grove, hoping to glean its secrets—or hoping to earn the favor of the druids who tend to the forest. The wisest of these craftsmen will hire mercenaries or adventurers as an escort to protect them from the clockwork creatures that inhabit the grove, to negotiate with the druids on their behalf, or even to steal specimens for them to examine in a safer environment.

Covering roughly 10,000 acres, the forest and its clockwork denizens are a marvel to behold. Trees are the primary structure found here, most topping out between fifty and one hundred feet. Some are metallic simulacra of trees found on the material plane—pines of green-tarnished copper, birches of silver, old oaks of deep brass—but some are unique to the grove and not seen anywhere but within its borders. Vines of intricate links of flexible metal wind across the forest floor and up tree trunks, and underbrush of delicate foil chime in the light breeze and at the passing of adventurers’ feet. In the center of the grove stands the heart of the forest: the Mainspring, a gargantuan tree that towers over the rest of the metallic foliage.

A constant, low thrumming and rhythmic thumping can be faintly heard throughout the grove, the sound of unseen machinery working away at some enigmatic process. The temperature within the grove is strangely mild; though steam escapes through vents within the trees, hinting at some greater industry occurring below, the environment is temperate and oddly comfortable to most creatures, even cooling in the evenings and warming around noon. The area follows through day and night in a perfectly even twelve-hour cycle: four hours of dawn, eight hours of day, four hours of dusk, and eight hours of night. Varying weather and seasons are the only things that appear absent here—the trees are always in bloom, and the temperature remains within a consistent range. Rain never falls, nor does snow, and clouds never mar the copper-colored sky.

The Druids of the Burnished Grove

The Burnished Grove is tended to by a community of druids who have devoted themselves to the care of this mechanical forest. Many of them follow the clockwork Circle of the Evergyre (detailed below), a strange path that blends the reverence of both nature and machine. On the surface, the idea of a clockwork druid may seem irreconcilable—since druids typically shun all things metal and man-made, how could one devoted to the artificial, unbending constancy of a machine also be in tune with the raw chaos of the natural world? But those who feel the movement of the tides, watch the path of the stars across the sky, witness the phases of the moon, and observe the cycle of birth and death and rebirth recognize that the world is rhythmic and reliable in its existence. Worlds turn; a caterpillar transforms into a butterfly who lays an egg that hatches a caterpillar; the seasons progress without interruption… the physical world itself is a great machine, persisting throughout the aeons.

Natural disasters on the material plane are seen as the hand of Rava, the Spinner of Fate herself, reshaping the construction of the world so that it might function more fluidly—or as intrusions by a malevolent, chaotic force attempting to disrupt the delicate cycle. This does not mean that the druids of the Burnished Grove are content to watch events pass without involvement; they work tirelessly to maintain the order of the grove, and those druids that leave the clockwork forest put the same care and effort into cultivating those they think are vital to the order and cycle of the world. Just as it’s nearly impossible to detect the rotation of the earth from its surface, it’s equally impossible to see the pattern of the weave from within, and few druids of the Burnished Grove claim to know what mysteries the Spinner of Fate keeps. They are ever vigilant for those who would work against the order of the natural world, those bent on destroying that which is not theirs to destroy.

The druids of the Burnished Grove work their way through the forest in a daily cycle, repairing each plant and tending to the creatures within a very specific routine: while the plants blossom and sprout almost magically, they are still machines that need constant attention in order to remain operable. Some druids occasionally venture out of the grove for necessary supplies—or for their own adventures—but they outsource what jobs they can in order to stay within the bounds of the forest where their attention is needed most.

The druids of the Burnished Grove adhere to a strict hierarchy. The youngest members tend to the forest floor and peripheral plants, making minor repairs and working as sentries at the forest edge. Those of middling reputation handle the larger repairs to the forest and its clockwork beasts and work in the subterranean levels known as the Verge and the Marrowforge. Only the archdruid herself and her cohort of five (known as the Spindles) tend to the Mainspring. Any others who attempt to enter the heart tree will find an unpleasant welcome awaiting them…