Skip to content
Home / Delve into the Depths in the Kobold Blog / To the Birds: Legends of the Tengu (Part 3 of 4) 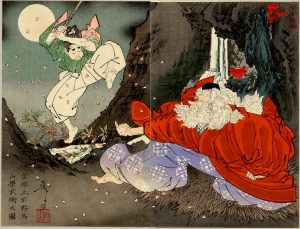 Sojobo, Tengu King, and Myths of the Far East

The tengu pervade early Japanese legends as tricksters and deviant beings whose intentions were not always pure of heart. Though once known as baby stealers and kidnappers, they were eventually described as helpful, protective, and caring. Always carrying with them the penchant for mischief and expressions of an animal nature but with a spiritual view mirroring our own, the tengu has a lengthy presence in mythology and religion, playing important roles in Buddhism, Hinduism, and Shinto…

The first tengu are found in ancient Japanese documents from about 720 CE, and are closely associated with the spirit world divinity and Mount Kurama, near Kibune in Japan. In Hinduism, they began as the Karura—the race of which the divine being, Garuda, was a part—and were mortal enemies of the naga. When they entered Buddhist traditions, they became guardian beings who were devoted to protecting the law of dharma and teaching lessons to Buddhist monks through harsh and sometimes foul methods. As recently as 1860, they have been mentioned in political notices: the Edo Government posted public notices to the tengu asking them not to cause mischief just prior to the arrival and visitation of a military general (or Shogun).

The king of the tengu was a yamabushi mountain tengu warrior known as Sojobo, who is perhaps best known for mentoring a warrior named Minamoto no Yoshitsune. Yoshitsune learned martial arts, tactical strategy, and magic at Sojobo’s home on Mount Kurama. Sojobo is an ancient yamabushi tengu with long nimble limbs, sprouting white hair, and an unnaturally long nose. He is incredibly powerful as a samurai combatant and mage; one legend notes his strength being that of 1,000 of his lesser tengu warriors. Sojobo instructs tengu in all aspects of their culture and history and is seen as a protective guardian and ancestral patron of the tengu races and others.

DESCRIPTION
Produced in sets of 2–5 stones, these monoliths are placed around temples, shrines, holy sites, and other locations of faith to allow immediate teleportation of those charged with its protection. This granite, marble, or other solid upright stone fixture is roughly 10–20 inches wide and around 30–45 inches tall, varying in ornamentation.

A temple guardian stone weighs 200–300 lb. It is always made to be self-supporting and stable in its resting place. Touching the stone, you are transported to the location of another stone made in the same set. With the secret, whispered command word (swift action), the temple guardian stone delivers you to within 10 ft. of the next stone in the series, or the nearest safe location if the intended space is occupied (similar to word of recall except that it delivers you to another stone in the set).

Subsequent uses of the stone set continue the teleportation in a predetermined series before restarting the cycle. The stones must be on the same plane and within 1 mile of the next stone with no two stones being more than 3 miles apart. Only one creature may activate the stone at a time. A single stone can be used every round up to 5 activations /minute before it must “recharge” for 1d4+3 rounds (maximum of 60 activations/day).

If an activation attempt happens during any recharge period or beyond the maximum uses per day, you are not teleported. Users with the Tengu Temple Watcher feat (see Kobold Quarterly #14) receive the benefits of a divine favor spell and may use the stones any number of times per day within the above time limitations, and the recharge period after their uses is only 1d4 rounds. A divine favor granted in this manner only lasts 4 rounds and grants a static +2 bonus.