Skip to content
Home / Delve into the Depths in the Kobold Blog / Narrow Escapes & Twists of Fate: The Art of the Cliffhanger 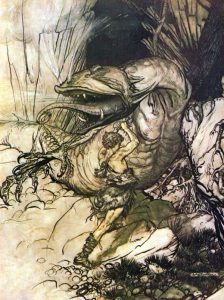 ” ‘Yonder in the unknown vastness’—his long finger stabbed at the black silent jungle which brooded beyond the firelight—’yonder lies mystery and adventure and nameless terror.’ ” -Robert E. Howard, “The Hills of the Dead”

The road may go ever on, but each game session has an assured – and often untimely – conclusion. And it seems the older I’ve gotten, the harder it’s become to schedule and maintain a regular game night with the same cast of players. Life, after all, has its distractions. But if you’ve a passion for roleplaying games, you’ll find the time to play them; and you may find that your favorite sessions – those that are brimming with action or suspense or intrigue – seem to fly by, leaving you creatively satisfied but wanting for more.

A campaign, as spread out over the course of several (if not scores) of game nights, is essentially episodic in nature. The whole of the story is so immense, it couldn’t possibly fit into few hours. And there’s a simple science to how time is spent at the game table: the more players there are in a game, the less time each player gets per session to shine. While suspense can be incredibly satisfying, waiting for your next turn or the next session can be a drag if there’s no creative sustenance to keep you imaginatively stimulated.

If you ever feel like that next game can never come soon enough, congratulations – it means something’s working and you’re having a good time. But how do we make the most of that momentum between sessions? And how do you craft and sustain a campaign that feels more like a grand storytelling than a mere succession of intricately scheduled game nights?

The answer to these questions is more complex than we can discern here today, but I’d like to try to begin realizing it by defining a few cornerstones of cliffhanger dramatic construction as inspired by the classic works of Robert E. Howard and his pulp contemporaries.

Pulp Serials and the Evolution of Dramatic Suspense

Throughout the past century, technology has informed and redefined the way we share and consume stories (and roleplaying games, as a result). Expressions from the pulp era like “don’t miss the next thrilling chapter” gave way to the “don’t touch that dial” mantra of radio, eventually stepping aside for the halcyon days of “must-see TV.” Now that an increasing majority of content in the modern world is on-demand, curation is as important as it’s ever been. And if you want to engender a certain age-old appreciation for dramatic tension at your game table, you’re going to have to manicure the ebb and flow of your campaign a bit to suit a classic sensibility.

Many of the stories printed in pulp magazines like Weird Tales, Amazing Stories, and Black Mask began life as novels but were serialized for publication. This is a terrific analogue for a well-crafted RPG campaign, especially when we consider fantasy classics from adventurists like Howard, Fritz Leiber, and Edgar Rice Burroughs. In particular, Howard’s Hyborian Age laid substantial groundwork for modern RPG world-building and lends itself wholly to those dramatic moments of derring-do Howard crafted so well. We may not be able to enjoy all of Conan’s exploits in one convenient sitting, but there’s a wonderful cohesion working behind the scenes to keep us engaged with this indomitable character and his uncanny world.

Moving from the analytical to the theoretical, it’s time to put some of our knowledge of serialized storytelling into practice. No matter the style or subject of your campaign, it’s safe to say any game could use a measured amount of shared expectation to help propel the narrative and maintain player interest. Personally, I like to run games thick with atmosphere and the air of suspense. And while such a game isn’t for everyone, it’s been an excellent tutor for me when it comes to creating tension and crafting a cohesive campaign full of taut fantasy thrills. Along those lines, here are a handful of learnings I like to keep close at hand:

–  Always have an exit strategy. Generally speaking, you’ll know when the game session is scheduled to end. Don’t have one end-all, be-all finale in mind for any given session. Instead, have a short list of potential conclusions and identify the one (or more) that best suits your situation when the dreaded moment of finality arrives.

– Hold your aces close to the hip. A good gamemaster’s gotta have a good poker face. If you’re well-prepared, one of the most difficult aspects of running a game is keeping those secrets safe and sound behind the screen. Defy all temptation to betray character knowledge simply because you know something your friends and fellow players do not. With great power comes great responsibility.

– Set up your payoffs. A good dungeon delve is full of distractions and diversions, but you don’t want your players to lose sight of the endgame because they’re tangled up in trivialities. Red herrings can be powerful plot devices for maintaining mystery, though you should keep an eye on how well your players are tracking the important details. Have a few methods handy for reintroducing your key plot points, NPCs, or items if players completely lose their way.

– Raise more questions than you can answer. RPG players often have grand imaginations; put that creativity to work for you between sessions. Not only will your players help shape your campaign with ideas all their own, they’ll provide clarity about where you can pick up the pieces for the next game.

– The play’s the thing. No matter how hard we try, we’ll never be able to execute the ultimate cliffhanger at the end of every game session. But fear not: if you lack that suitable moment of suspense, a properly punctuated sweep of dramatic prose can serve to highlight the session’s key triumphs and tribulations, as well as tease players with what waits in store.

– Avoid deus ex machina at all costs. Whatever you do, don’t railroad your players’ ambitions to suit a rigid narrative frame. Roleplaying is a collaborative effort. One of the gamemaster’s duties is to guide the narrative, but not at the cost of anyone’s enjoyment. Players won’t always be pleased with what happens in-game to their characters, but a good player will find satisfaction in the serendipity of a well-dramatized exciting series of events.

The Hour of the Dragon was the only novel-length Conan tale and marked one of Robert E. Howard’s most ambitious yarns of the Hyborian Age. Originally published as Conan the Conqueror by Gnome Press in Britain, the novel’s 22 chapters were serialized for American publication over the course of 5 issues of Weird Tales magazine, from December 1935 to April 1936. The lurid cover depicts it as “a vivid weird story of a thousand eerie thrills.” Indeed, the plot is analogous in more moments than one to what we’d imagine (or want) a “typical” D&D adventure to look and feel like. And despite (or perhaps because of) its serialization, each chapter is a masterclass in episodic storytelling.

“And now he knew that his ears were not playing him tricks. He was being followed, and his pursuers were closing in on him. In the darkness sounded shufflings and slidings that were never made by human feet; no, nor by the feet of any normal animal. The underworld had its bestial life too, perhaps. They were behind him. He turned to face them, though he could see nothing, and slowly backed away. Then the sounds eased, even before he turned his head and saw, somewhere down the long corridor, a glow of light.”

1 thought on “Narrow Escapes & Twists of Fate: The Art of the Cliffhanger”