Skip to content
Home / Delve into the Depths in the Kobold Blog / The Kobold Guide to Worldbuilding: Words from the Editor’s Desk 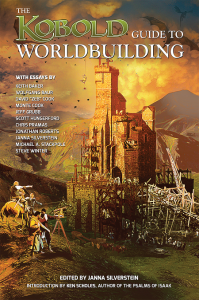 When Wolf Baur invited me to edit the next Kobold guide, I couldn’t have been more excited. He wanted to do a book on worldbuilding, he said, that would feature mostly new material and some of the best names in the game design and worldbuilding business that we could get our hands on. And so, available now, Kobold Press has The Kobold Guide to Worldbuilding. Contributors include Wolfgang Baur, Keith Baker, Monte Cook, David “Zeb” Cook, Jeff Grubb, Scott Hungerford, Chris Pramas, Jonathan Roberts, Michael A. Stackpole, and Steve Winter. The book also includes an introduction by bestselling fantasy author Ken Scholes, whose Psalms of Isaak series is set in one of the grandest worlds I’ve ever seen. And even I’ve got a chapter in there—but more on that in a moment.

The project intrigued me for a couple of reasons. First, I don’t know a single game designer or author who hasn’t been asked about this subject. Such a project could provide definitive answers to every aspiring writer and game designer out there. Second, it meant I’d get to work with some of my favorite people in the writing business.

Given the breadth and depth of the experience of our contributors, we ended up with essays on a wide variety of subjects: creating cultures and histories, maps, societies, pantheons, and so much more. What I quickly discovered was that there’s no such thing as a definitive answer. Like a diamond, each of these subjects has a number of facets, so some subjects are covered in more than one chapter, each with a different approach. And while most of the chapters cover the creation of worlds, at least a couple of chapters cover the business side of worldbuilding—how to keep track of it all, and what’s involved when you want to do work in someone else’s universe. It’s important to be creative, but you have to be practical as well.

I’m excited about every single word in this book, but some of the essays provide the kind of practical, hands-on advice that GMs and designers can apply right away. The chapter that leaps immediately to mind is Jonathan Roberts’ brilliant chapter on making maps. Roberts created the maps for George R.R. Martin’s A Song of Ice and Fire series, among others. Through not just his words but through illustrations as well, he explains in a clear and detailed way how he constructs maps that reflect not just the fantastic worlds he’s mapping, but make those worlds real and believable at the same time. Michael A. Stackpole, whose work spans everything from BattleTech and Mechwarrior to Star Wars to his original fantasy novels including the Crown Colonies books, talks about how both biology and history affect cultural development. Steve Winter challenges classic assumptions about how and why pantheons work the way they typically do in RPGs. My own chapter talks about writing in someone else’s universe: how you get that work and how you do it well and thoughtfully. And Wolf Baur, the Kobold-in-Chief himself, takes on what worldbuilding is, key do’s and don’t’s, and draws on his years of experience to provide the kind of insight readers are unlikely to find anywhere else.

On the subject of being definitive, as I said above, there’s no such thing. When I thought the book was done, I asked Wolfgang for one more essay before closing the table of contents. Even as we were putting the book to bed, I thought of more subjects to cover than the essays in the book cover now. It’s the nature of the worldbuilding business: there’s always some detail you want to capture, some aspect that will make the world a little more fantastic—or a little more real. But I think we’ve put together a collection that hits the key subjects and I hope that you’ll agree.

1 thought on “The Kobold Guide to Worldbuilding: Words from the Editor’s Desk”