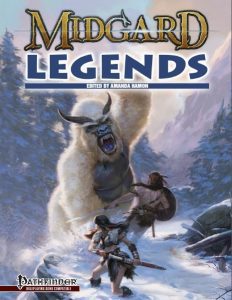 Now available at DriveThruRPG and the Paizo Store! Bring dramatic history and wondrous myths to your game table: the legends of heroes, villains, monsters, and magic that define Midgard’s most prominent regions.

From the cold foothills of the Riphean Mountains to the burning lands of the Mharoti Empire to the brutal, wind-swept terrain of the Rothenian Steppes, these are the tales that have molded this world into a place of unrivaled wonder and mystery.

Included are a host of legendary monsters, class archetypes, magic items, and artifacts:

These are the Midgardians’ most beloved tales, and they are a rich source for adventure hooks, character backgrounds, allies and foes. Use them with the Midgard Campaign Setting, or bring any of these legendary figures and magic items to your own world!