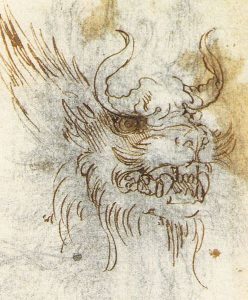 Ok, full disclosure: I’m not really talking about 1,000 dragons. It’s probably closer to 304 or something like that, but you must admit, The Quest for About 304 (give or take) Dragons doesn’t have quite the same flair!

Before we delve into my epic quest, a little background…

I started playing D&D (good old 1st Edition AD&D that is) as a kid in the late 70s. We also played many other RPGs back then… Marvel Superheroes, Champions, Elfquest, FASA’s Star Trek, Star Frontiers, the list goes on. But it always came back to AD&D for us. We played as often as we could and read everything we could get our hands on when we were not actively playing. It was truly a magical time.

I kind of faded out of gaming around the time 2nd Edition came out: mainly because most of my gaming friends turned into grown ups and moved away when I wasn’t looking but also because 2nd Edition just didn’t quite do it for me. (I did actually play 2nd Edition a little though and there were aspects that I did like.) It was 3rd Edition D&D really pulled me back into the world of gaming though, and the Pathfinder RPG has pretty much locked me in.

Where was I? Oh right, the quest…

So back in the late 70s and very early 80s, my friends and I used to go to a little shop near our hometown called The Magic Shop. As you might expect, they sold all kinds of cool magic stuff—card tricks, magic sets, that sort of thing. They also sold all kinds of great D&D stuff. Modules, the rule books themselves, metal miniatures from Grenadier and Ral Partha… and Dragon magazine. We went to the Magic Shop at least every couple of weeks and picked up, among countless other things, the new issue of Dragon whenever it came in. And what a magazine! It was a treasure trove of new ideas, answers to questions, new official content. In many ways, it was like a lifeline that seemed to connect us to the creators of the game. I still can remember discovering my very first issue—#45.

I kept every issue I got from then on, haphazardly organized on the small bookshelf in my bedroom. I read and re-read them constantly. I photocopied particularly good articles, so I could keep them organized in 3-ring binders. If the covers came off, I taped them back on. Quite simply, I really loved that little magazine. We all did.

Unfortunately, time waits for no one. By 1989 or so, I was older and had stopped playing D&D for the most part. Eventually, I even got rid of all my Dragons, more than likely during a move. The last Dragon I had was probably around #140. It pains me to even think of this now, but… I’m pretty sure I probably just threw them all away.

Fast forward maybe a decade later. A co-worker of mine found out that I used to play D&D and told me how excited he was about the new 3rd Edition that had recently come out. Intrigued, I stopped at a bookstore on the way home that very evening and, to my delight, discovered that Dragon magazine, my old friend, was still around. It looked better than ever and even had all kinds of new 3rd Edition info. So I bought the issue (#275) and was hooked all over again. I began playing 3rd Edition soon after that, and I started buying each new issue of Dragon when it hit the bookstore (I did miss an occasional issue over the next few years, unfortunately, since I only subscribed periodically). I found that the same thrill was still there each time I picked up the new issue. Much like the younger me had once done, I stored each new issue on the bookshelf in my home office (although I was much neater and more organized this time around). Life was good.

I read and re-read the announcement. Dragon as a print magazine was going to end. I was crushed. I just couldn’t believe it. I was angry and sad. Helpless.

It’s important to understand that I no longer feel this way. I do miss Dragon, of course, and probably always will. However, a great many wonderful things did end up happening as a result. For those of us that love the Pathfinder RPG, we have a wonderful game and campaign setting.

And for those of us that do miss Dragon magazine, I think we can all agree that Kobold Quarterly magazine has done an amazing job of stepping into that void. Now, I get that thrill each time a new issue of Kobold Quarterly arrives in my mailbox!

Part One: The Quest Begins

Of course, I didn’t have the benefit of these insights then. I just knew how upset I was. After a few days of moping, I decided there was something I could do. I could at least be sure to buy the handful of 3rd Edition issues of Dragon I was missing. It was a fun, painless, and slightly melancholy little quest I set out upon. Between Paizo’s web site and eBay, it was fairly easy to acquire my missing 3rd Edition issues. When the final issue of Dragon was finally released (#359) it made me feel a little better somehow to see that continuous run from issue #274 right up to the final issue sitting on my bookshelf.

But then a curious thing happened. While I was searching eBay for those missing 3rd Edition issues, I had also noticed that older issues were showing up in my searches. For whatever reason, it had just never occurred to me that those older issues would also be out there like that. But they were. Calling to me. I started to remember how much I loved Dragon when I was a kid. I’m not sure why exactly, but at some point, I realized that my little quest was not over after all. It was not enough that I had all the 3rd Edition issues of Dragon. I decided that I also wanted (no, NEEDED) all those issues I had foolishly discarded when I was younger. And so, I officially set myself on the Quest for 1,000 Dragons, so to speak.