Skip to content
Home / Delve into the Depths in the Kobold Blog / Advanced Feats: Feat of the Week #2 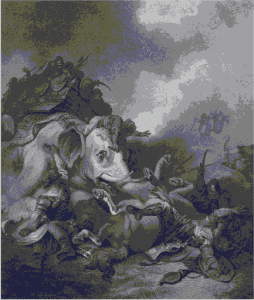 You can treat any nearly animal, magical beat, or vermin as trained combat mount.

This feat was supposed to be inspired by the Cavalier class which has a strong mounted combat theme. The core of the idea was the ability to use a non war-trained mount without the headache normally involved. That quickly led me to the more fantastic notion of the savage turned hero who can ride nearly any beast as if born to do so. Unfortunately, this image doesn’t fit the Cavalier much at all, and as they get their own well trained combat mount, they have little need for it. Happily it works nicely for Feat of the Week.

The core mechanic was fairly easy to design. The challenge was that untrained mounts are a pain to ride in combat and the solution was to treat any mount you are riding as being combat trained. I want to be as rules specific as I can so I looked up the entries for the Ride and Handle Animal skill to make sure I used the exact and most prominent term for combat training. I also looked through the monster types to make sure I included all those that made sense to me as mounts. I entertained the idea of including dragons, but I decided that such creatures would not have the man and beast bond that this feat imagines.

Limiting this ability to a creature you are actively riding is important for balance and believability. If you could simply treat any animal as mount trained you could command them to follow you or attack on their own and so forth which would almost make the animal handling skill obsolete. Most folks would not play it that way by default, but it’s important you try to imagine how you can bend the rules and put up roadblocks when possible. Fortunately this limitation only takes about 3 words to bake into the feat.

While the first benefit is probably fine for a feat, I wanted to get the “cool factor” up a notch and to capture my savage beast rider inspiration. I want the beast rider to be able to simply hop on the local wildlife and ride into battle. There are no solid rules for how this works and handle animal doesn’t speak to the animals attitude towards you thought it’s something most GMs can easily arbitrate. I decided to keep it simple and just specify an attitude and an automatic success.

For the prerequisites I felt that Mounted Combat was fairly essential and something any character taking this would likely want to have anyway. I didn’t want to assign a significant feat cost as this feat is more about convenience and role playing than combat power. I did add a very small cost with a minimal charisma requirement as it just felt like a certain amount of personal magnetism would be required to get wild animals to like you enough to ride them.

I think this feat would be a great thematic choice for rangers or druids and pair well with their Wild Empathy feature. Other characters with a wild sylvan background would also find it a fun pick. At low level there is some small potential for abusing this feat but as you would have to seek out powerful beasts for it to be more than a convenience.

The Complete Advanced Feats features 180 feats for Pathfinder, 15 detailed character builds, class breakdowns, and extra goodies like a special character sheet for mounts. It’s the perfect companion to the Advanced Players Guide, and available in print and PDF.

1 thought on “Advanced Feats: Feat of the Week #2”