Skip to content
Home / Delve into the Depths in the Kobold Blog / Midgard Icons: Queen of Night and Magic 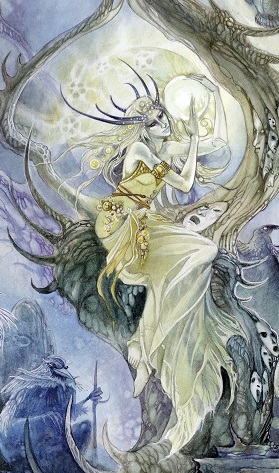 In this fourth installment, we take the Niflheim Road to the Winter Court of the shadow fey to meet its cold and beautiful Queen…

The Queen of Night and Magic

The Queen of Night and Magic rules the Shadow Realm, where she dreams of conquest, blood, and loss. She remembers too many worlds that once were hers.

“We will tolerate many things, child of the day. Poor manners are not among them.”

Within her palace of glass and dreams in the Shadow Realm, attended by 1,000 fey lords and ladies with alabaster skin and hearts of ice.

Her Celestial and Royal Majesty Sarastra Aestruum, Queen of Night and Magic, rules the Shadow Realm, the source of darkness and arcane energies. Her Moonlit King is rarely seen but is feared even among the shadow fey.

The Queen weaves her plots out of boredom and malice; her mastery of the arcane and her control of deceptions and misdirection make her highly dangerous. She has a perfect memory for the slightest insult, and some of her revenges take centuries to complete.

The Queen’s attention is dangerous, but can bring great reward to those who please her—a difficult prospect given her mercurial moods. Some of her missions resemble quests out of an old fairy tale: retrieve a magic wand from a bottomless pool, find a transformed prince or awaken a sleeping fey beauty. Others are capricious and cruel. For example, a party may be tasked with ruining the life of someone whose ancestor failed to address her by her full title 300 years ago.

If the Queen finds an adventurer attractive she may take him or her as a lover, until she grows bored and discards her quickly-forgotten toy.

Unless they magically travel to the Winter Court, adventurers will deal with royal ambassadors such as Thelamandrine, the Hidden Ambassador to Zobeck. They might meet the queen’s relatives, such as the Black Prince of the Scàthsidhe in the Empire of the Ghouls. Lord Fandorin of Morgau and Doresh is believed to follow the Goddess of Night and Magic.

Sarastra counts Baba Yaga as a friend and ally, and subtly influences the Ghoul Emperor through her representative the Black Prince.

The Free Council of Zobeck permits trade with the Shadow Realm, but will never forget that Sarastra granted House Stross its mastery of shadow magic. (After the events in Courts of the Shadow Fey, the Free Council is extremely unhappy about the Queen’s designs on their city.) Linked through Hecate, the Oracle of Kammae and the Queen are rivals for the love and adoration of those who revere night and magic.

No one knows for certain when Sarastra, the daughter of High Queen Lelliana Thorntree Endiamon of the elves, was exiled to Shadow or why. But since that long-ago day, she has ruled from her dark throne of gold-flecked lapis lazuli as the Queen and Goddess of Night and Magic, attended by goblins, sprites, talking animals, demons, and her cold and malevolent children, the shadow fey.

1,400 years ago, the Holly King and his fey followers sacrificed a young woman on Rosehaven Hill in the Margreve forest, and planted a black oak on the site. This ritual, meant to steal Sarastra’s power, was a trap set by the Shadow Princess herself. A powerful curse transported them all into the Plane of Shadow, where Sarastra forced them into servitude. The Heartwood Pact also connected the black oak, the hill, and the castle Shadowcrag that would later stand upon it, with the Shadow Plane.

To protect the oak, the Queen allied herself with the ambitious human Stross family. In exchange for fostering their eldest daughters and eldest sons in the courts of the shadow fey, the Stross learned shadow magic and gained the right to rule the Rosehaven lands—as the fey called the small walled city of Zobeck and the kobold mines around it.

Sarastra next enters history during the Black Sorceress’ Revolt against the elves, nearly 800 years ago. When the fey roads became corrupted, the Queen and her shadow fey foresaw the end of elven rule in Midgard and allied themselves with the dark powers summoned by the mages of Caelmarath.

When House Stross fell in Zobeck’s Great Revolt, the Queen and her people faded from mortal memory for nearly 80 years. Then two merchants of Zobeck, inspired by bards’ tales of the fey and aided by an Arcane Collegium linguist, succeeded in establishing trade with the Shadow Realm. Since that time the Chartered Merchants of Scáthesidhe have conveyed moonlight steel and mirrors to Zobeck direct from the fey lands . Other caravans now brave the shadow road each year, returning with riches and wonders never before seen.

For these isolated and dangerous fey, trade with the mortal world presents the greatest opportunity in many bleak years. The Shadow Realm is stirring, and the Queen of Night and Magic’s power grows.

Everything will be all right provided that the Queen cannot seal the bargain she wants most: one that will give her dominion over her old lands in the Margreve, and—who knows?—perhaps eventually, all of Midgard.

2 thoughts on “Midgard Icons: Queen of Night and Magic”