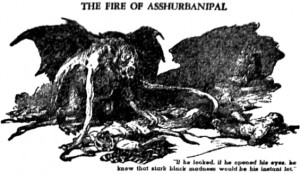 “Who dies first?” —Conan, “The Phoenix on the Sword”

Monsters have been teaming up since the dawn of D&D. We’ve seen unlikely allies emerge from the game’s rogues gallery as far back as the famed Keep on the Borderlands. But what happens when villains actually get in the way of each other’s ill-gotten gains? Well, brave readers, I hope to answer this question by taking a look at a few timeless tales from the pulp masters.

My previous essay, Eight Frightfully Eerie Pulp Fiction Adventure Hooks, offers a primer on the weirder side of the pulp genre with a selection of spine-tingling stories whose influence on the tabletop RPGs of today is resolute. Here, we’ll revisit one of those writers who defined the genre, Robert E. Howard, with what is perhaps his most accomplished Cthulhu Mythos tale — “The Fire of Asshurbanipal.” We’ll also take a quick look at a key scene from the 1958 classic The 7th Voyage of Sinbad, a film born of the pulp legacy but rather based on stories that influenced Howard and so many of his contemporaries.

“He died without telling how he had reached the mythical city in the first place, but the old trader thought he must have come from the northwest…” — Robert E. Howard, “The Fire of Asshurbanipal”

“The Fire of Asshurbanipal” presents the wild tale of wanderers Steve Clarney and Yar Ali and their accursed journey to a silent dead city of black stone set in the drifting sands of the Arabian desert. Here they seek fortune and glory by way of the titular Fire of Asshurbanipal—a flaming gem clutched in the bony fingers of a skeleton on an ancient throne.

As the story begins, they’re lost in the desert, on the run from Bedouin brigands, and dangerously low on provisions. In their darkest hour, the companions discover the harrowed ruins of Kara-Shehr and reach the inner sanctum of the Black City’s unholy temple. And this, my friends, is where the story gets good…

Yar Ali (very appropriately) gets a bad vibe from the Fire of Asshurbanipal and tries to talk Steve out of taking it. Just as our heroes are perched ever-so-cautiously on the edge of disaster, the company of Bedouins arrives en masse with their contemptuous commander, Nureddin. Our heroes—hideously outnumbered—are subdued after a brief sortie as Nureddin steps forward to claim the sacred jewel for himself.

Then—in one of Howard’s finest moments—the Fire of Asshurbanipal’s monstrous guardian swiftly emerges from a hidden chamber to annihilate Nurredin and his Bedouin brigands while Steve and Yar Ali cower for their lives in absolute horror. The cosmic folly of their timing doesn’t go unnoticed by our heroes as they hightail it to safety and ensuing lifetimes of tenuous sanity.

I’ve always been struck by the serendipity inherent in Steve and Yar Ali’s survival of their encounter at Kara-Shehr. What if the Bedouins weren’t so hot on their heels? Would Steve have listened to Yar Ali’s advice? And would Yar Ali have survived if he didn’t? Steve’s element of choice is perhaps the important takeaway when it comes to designing your own encounters. The “lesser of two evils” isn’t always clearly defined—but the fun for your players lies in defining and surviving it.

“Hold this—I’m going to see where that stone mouth leads…” —Sinbad, The 7th Voyage of Sinbad

To contrast Howard’s tale of Cthuloid terror, let’s briefly study one of the finer moments in The 7th Voyage of Sinbad, in which the legendary eponymous hero must endure a comedy of errors at the errant hands of the sorcerer Sokurah.

During the epic 2nd Act, Sinbad and Princess Parisa narrowly escape the magician’s underground lair only to come face-to-face with a wandering cyclops. With a bit of derring-do, Sinbad doubles back to free Sokurah’s dragon sentry… and astonishment ensues! The monstrous cyclops and the wingless drake fight to the death while Sinbad and the Princess make a harried retreat. But the victorious dragon and the meddlesome magician are in hot pursuit…

Moments later, Sinbad’s crewmen slay the dragon and it topples to its death, crushing Sokurah in its massive wake. A critical hit if ever there was! Ray Harryhausen’s breathtaking stop-motion effects bring this awe-inspiring scenario of high adventure to life. But with its clear-cut sequence of cause and effect, it’s also one that easily translates to the tabletop.

“He who is patient obtains.” —Prince Koura, The Golden Voyage of Sinbad

These are two timeless tales that excite the senses and stir the imagination. To a more sinister point, they help me imagine how to put my players between the proverbial rock and a hard place. And if we want to start building better encounters, it’s not a bad idea to get back to the basics.

The notion of monster or enemy infighting is a common thread between “The Fire of Asshurbanipal” and The 7th Voyage of Sinbad—one that helps weave more elaborate designs when it comes to creating your own encounters. Start with a sense of place. Once you’ve developed an interesting environment, it’s time to populate it. Then populate it again. But instead of simply running your players through a never-ending gauntlet of nasties, let them lose their way in a dynamic world where your monsters have lives—and adversaries—all their own.

3 thoughts on “The Mischievous Art of Monster Infighting”