Skip to content
Home / Delve into the Depths in the Kobold Blog / Author Interview: J.F. Lewis (Part One) 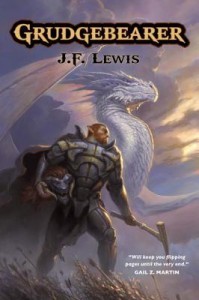 Cape Rust recently asked J.F. Lewis, the author of Grudgebearer, some questions about writing, gaming, and more. Take a look at the first part of this interview.

I have read your bio in the back of your books. What else should readers know about you?

About me? Nothing. I’d rather readers know my characters. There’s a little bit of me in all of them. Hopefully there is more of me in Kholster than in Dolvek (or Eric from my Void City series). If you must have something more: I’ve recently gotten into fountain pens and I’m about halfway to black belt in tae kwon do.

That’s asking if I like cake or ice cream. I love comics and I don’t care whether they are Dark Horse, Archie, or Image as long as they are worth reading. I started out a Marvel Zombie, if that helps, but I’ve loved Batman and Superman as long as I can remember. Wolverine and the Hulk are my two favorite Marvel characters, but the character I hold most dear is Stan Sakai’s Usagi Yojimbo.

What comic or graphic novel has impacted your life the most, and why?

It would be too hard to narrow things down to a single graphic novel (V for Vendetta, Cerebus: High Society & Church and State I & II, Watchmen, Frank Miller’s Dark Knight, Kingdom Come, and even Jeff Smith’s Bone: Out of Boneville, could all vie for the top of the list). In the single comic category, though, it’s The Saga of the Swamp Thing #24, “The Anatomy Lesson” by Alan Moore. I read it in one of those Year’s Best Digest editions DC used to do and it was the first time I realized that comics could be more than just super hero battles.

Beyond comics, what types of books do you read?

I don’t draw much of a line between comics and prose—I mean is there any real difference in the value of the storytelling in Locke & Key versus Joe Hill’s NOS4A2? Having said that, I just finished Doctor Sleep (Stephen King’s sequel to The Shining) and M.C. Planck’s Sword of the Bright Lady. Joe Sprunk’s Son of Shadows is up next.

It goes in cycles I suppose. Genre isn’t as important to me as the quality of the writing. Roger Zelazny’s Nine Princes in Amber is my favorite book, but I also love Terry Pratchett’s Discworld, Richard K Morgan’s Altered Carbon, and Dr. Lewis Dartnell’s The Knowledge. Lois McMaster Bujold’s Vorkosigan Saga swept me up just as easily as Frostborn by Lou Anders, Preston and Child’s Agent Pendergast books, or Laurie R. King’s Beekeeper’s Apprentice. If the characters are engaging and the plot is great, I’m happy. Even with non-fiction, if the subject is interesting and not dryly written, I’m right at home.

Ha! Another trick question. ;) Pathfinder, Amber Diceless Roleplay, and Cinematic Unisystem are my favorite pen and paper RPGs. Roleplaying taps into that same creative engine from which my novel characters and plots come, so it’s a fun way to test drive ideas while goofing off with friends. Growing up, I loved Pools of Radiance and all the old D&D computer RPGs, [plus] the Ultima Series. Now I play a few iPad puzzle games and a little bit of WoW mainly because I get to adventure with family and friends, though I’m not a big lore guy and my favorite part of the game is actually flying around as a druid—so… I’m a bit weird, I guess.

Who are some authors that have influenced you and where do they manifest themselves in your books?

If you look at Terry Pratchett and Douglas Adams, I think you’ll find the source of my literary DNA when it comes to the lighter moments in my books. Michael Moorcock and Robert E. Howard played a big role in my desire to write about my own world with my own races. Walter Mosley struck the spark which led me to thinking about race issues more deeply.

Do you remember where the idea for Grudgebearer hit you? Did it hit like a warpick or more like flexible magical stiletto?

It hit in stages. The main spark came from playing Final Fantasy VII and talking with a good friend of mine about running a roleplaying game set there. Originally I set out to write about Cadence’s son all grown up, but the more I built the world, the more I kept being drawn to Kholster, Rae’en, and Wylant. When I was driving home from work one night, I heard a piece on NPR about reparations for slavery and the intense emotions and complications around that… as a writer, you kind of train yourself to see an issue and say, “Yeah, but you know what would make that even worse?”

So instead of dealing with the ancestors of people who have endured something so evil, I wondered what it would be like to have to deal with the victims themselves.

How long did it take to develop the Aern in your mind? Did you have to stray from some of your initial thoughts and ideas about them or did they stay the course?

Originally, the Aern were basically these humorless-yet-honorable carnivorous elves with magic weapons and armor. I think I wrote the novel six or seven times before getting them right. One of the big breakthroughs was when Gail Z. Martin ( The Chronicles of the Necromancer series) asked me the question “Why doesn’t Kholster just break his oath?” That led to yet another draft in which we learn more about the Aern early on via Rae’en’s first command. I moved the beginning of the novel further back so that it began with the Eldrennai breaking the truce rather than with Kholster arriving at the Grand Conjunction… And I added the conversation with Parl, the Foresworn.

Read more in the second part of this interview, which is coming soon!