Skip to content
Home / Delve into the Depths in the Kobold Blog / Harrowing Haunts: A Legacy of Good 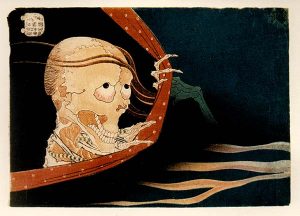 “Pinkskins! Pinkskins in the warren!” The shouts woke Kiro from his slumber. Again and again, the call was repeated. Grabbing his spear, he raced to the cave entrance where several other warriors joined up with him. He glanced at his comrades: their tails wagging with excitement, their teeth bared.

They surged into a corridor and came face to face with the pinkskins, those strange pinkskin eyes shining brightly in the flickering torch light and shadows racing over their pinkskin faces. “Big. They are so very big,” thought Kiro, his stride faltering. “Attack!” yipped one of his comrades, and they surged forward with spears stretched out before them, barreling toward the pinkskin with the greatclub. The pinkskin grimaced and screamed something before he swung his club. Two kobolds to Kiro’s left were suddenly no longer there, but Kiro did not care, for he felt how his spear sank deep into the pinkskin. Kiro yipped with joy. And then the pinkskin’s backswing hit him…

Pain. His chest was on fire, and he couldn’t catch his breath. Lying on his stomach, he could hear the pinkskin chatter nearby. Kiro tried to crawl away, but his strength had left him; his claws scratched feebly over the cave’s floor. Someone was tugging on his belt, going through the pouches. Roughly he was rolled upon his back, and a halfling came into view whose tiny delicate hands moved swiftly though his pockets. The halfling found his shiny rock, Kiro tried to interfere, but his limbs would not answer him. The halfling showed the shiny rock to the others; they cheered.

Breathing was a little easier now. The pinkskins left, venturing deeper into the warren, leaving Kiro with his thoughts: “they took my shiny rock, they took…”

Delving deep into kobold warrens, and dispensing death to all. It is the adventurers’ way, but sometimes, the dead don’t allow you to escape with their treasure. Sometimes they come back.

LE haunt (10-ft.-diameter area); persistent
Caster Level
2nd
Notice
Perception DC 20 (to hear labored breathing and soft yipping in Draconic)
hp
9; Trigger proximity; Reset 1 week
Effect
When this haunt is triggered, a kobold with a crushed chest manifests. The apparition reaches into its chest and throws blood at any target; if a nearby target has Kiro’s shiny stone, he or she is the haunt’s primary target. Treat the blood as acid splash (+4 ranged touch attack, 1d3 acid damage).
Destruction
Burying Kiro with his shiny stone destroys the haunt.

3 thoughts on “Harrowing Haunts: A Legacy of Good”