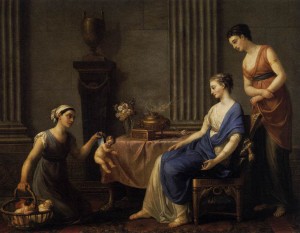 “Being deeply loved by someone gives you strength, while loving someone deeply gives you courage.”

The romantic interest hostage is a staple of action movies, fantasy, and comics. The setup is easy, lazy writing, and the good guy always comes out on top, except when he doesn’t and the romantic interest gets killed and the story takes the turn of a revenge piece. WHYYYY? Because, it’s easy, lazy writing and some hack writer doesn’t respect the audience enough to give it something more mature.

Love is presented as an overwhelming force of nature that lives in an oxymoron. It is our greatest strength and weakness. People do stupid things for love and somehow the universe makes that work out for them. Love is a trope.

The good news is breathing new life into tropes and making them playable battle board fun is what we do with an Old Hat Monster article, so join me after the jump as I present some new twists on the old plot hook and some new feats based on love’s terrible power.

First, I think it’s important to remember that most of the hackneyed tropes are presenting infatuation. Infatuation is that fleeting obsession that sometimes starts a relationship—the “honeymoon phase” is infatuation. If you’re lucky in real life, you get more than that and a true bond forms; everything else is hormones.

For gaming mechanics, we are going to keep it simple: Infatuation is a CR 0 template with merits and flaws that balance out, and obsession is a CR 1 template that shows that unrequited love has a dark side that can get a little hairy. True Love is a team feat, and should one’s true love die first, the vengeful lover template or Widow(er) feat may result.

The person is treated as though he or she is under the effects of a charm person spell for 1 week per Charisma bonus of the subject of their infatuation, minimum of 1 week. After this period, the infatuation will end with a successful Will save DC 10 + Charisma modifier of subject + CR of subject. As long as the subject consents, the infatuation remains. If the subject does not reciprocate, there’s a chance this template escalates to Obsession.

As a house rule, the infatuation template could be applied any time someone rolls a 1 on a save against a charm effect. This means infatuation can strike the party or villains against the party.

The Will save escalates to a +4 bonus, except against the subject of their obsession for whom the Will save becomes a +8 bonus.

A player character unintentionally picks up a stalker. This is good for the enchanter that abuses his or her powers against merchants and the like. If you wish to go darker, an NPC ally that is otherwise a good person has an unhealthy obsession with another ally’s romantic partner.

Prerequisites: Both parties must have at least 3 Intelligence and both must take the feat for it to take effect.

For those who love and are loved, a strength comes from within when it comes to defending their loved ones. This is reflected in a +2 Will save bonus and a +2 static bonus to any action that defends or retaliates on the behalf of the true love. The two in love must be within 30 ft. for this bonus.

This is not defined as lovers for a reason: The summoner and his or her eidolon might have a special bond, and so could a parent and child or twins. Tying two characters together more closely changes the dynamic of a party, and these ties generate plenty of plot.

If one’s true love dies by violence, the Vengeful Lover (CR+1) might apply. This application has no other effect beyond providing the following ability.

This template on an NPC against a monster could build up a scene nicely and make the fight mean something more than XP and treasure.

Prerequisites: Must have had the True Love feat and the true love must no longer live.

Description: Love can linger beyond death, bringing a widow(er) comfort to have known its embrace. Widow(er)s gain a +2 bonus to Will saves and up to two new class skills once held by their lover.

Any questions? Did I leave a type of love out? I’ll address any questions or suggestions in the comments. Get preview hints of future articles by following me on Twitter @GM_Solspiral.