Skip to content
Home / Delve into the Depths in the Kobold Blog / Terrors of the Dragon Empire: Dracotaur 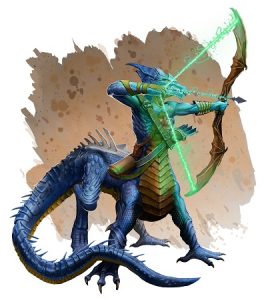 The Mharoti Dragon Empire is the scourge of Midgard and the Southlands alike. The vast armies of the Dragon Empire march relentlessly across the known world in their endless wars of conquest, spreading fear and chaos wherever they go. The creatures that make up the Mharoti forces are powerful and frightful, ranging from deadly kobold ambushers mounted atop camouflaged drakes to elite companies of the finest dragonborn warriors Midgard has ever seen. Feared by the Mharoti and their enemies alike, these are the terrors of the Dragon Empire.

This series is bursting with new monsters and NPCs for you to use to terrorize your unsuspecting players.

It ran with the speed of Azuran’s winds, my lord. Its footfalls thundered behind me as my party fled, like demons pounding at the gates of hell. Lightning rained down behind me with the fury of no earthly tempest. I dared only turn round in my saddle to sight the beast for short glimpses as I spurred my horse onward, but what I saw was frightful beyond belief. It was as tall as three strong warriors, armored from horned head to clawed foot in azure scales, and aiming a bow that hurled thunderbolts. It was like the horse-men of the northern plains, my lord, but also no less than a dragon.

Countless stories surround the cloudy origins of the dracotaur, though most of them involve the centaurs of the Rothenian Plains. A popular theory in the Mharoti capital is that, centuries ago, the Mharoti sultan captured Rothenian centaurs during a skirmish on the plains and tortured them by drowning them in dragon’s blood—but found that when their bodies were fished out, they had been transformed into perfect draconic warriors. The nomadic desert folk see the Rothenian centaurs as noble creatures and believe that the wandering dracotaur are centaurs blessed by the dragon god Azuran. Few Rothenian centaurs know of their draconic counterparts’ existence, but those who do consider them a completely distinct species, unrelated to the centaurs at all.

Dracotaurs are among the mightiest of the dragonkin, but they are so rare and so fearsome that most Mharoti believe them to be naught but a legend. The Dragon Empire’s legions occasionally enlist dracotaurs willing to serve the empire, though most of these dragonkin prefer to live nomadic lifestyles on the desert sands. In decades past, some ambitious centaur tribes have traveled south of their native Rothenian Plains to raid villages on the border of the Dragon Empire. These tribes were swiftly intercepted and overpowered by a band of four dracotaurs. Now, these four dracotaurs are the so-called divine warlords of their own centaur herds, galloping freely across the northeastern reaches of the Dragon Empire.

Charge. If the dracotaur moves at least 30 feet straight toward a target and then hits it with a bite attack on the same turn, the target takes an extra 21 (6d6) piercing damage.

Multiattack. The dracotaur makes two longbow attacks or one attack with its bite and one with its claws.

Lightning Arrow (Recharges after a Short or Long Rest). The dracotaur shoots an arrow at a point within 150 feet, which then explodes into a sphere of lightning. Each creature in a 20-foot radius sphere centered on that point must make a DC 15 Dexterity saving throw. A target takes 28 (8d6) lightning damage on a failed save or half as much on a successful one.

Lightning Breath (Recharge 5–6). The dracotaur exhales lightning in a 60-foot line that is 5 feet wide. Each creature in that line must make a DC 15 Dexterity saving throw, taking 33 (6d10) lightning damage on a failed save, or half as much damage on a successful one.

Four main types of dracotaur have been recorded by Midgard’s chroniclers, lending credence to the theory that the first dracotaurs were created by Azuran, dragon god of the four winds. The dracotaur above represents the blue-scaled dracotaur of the Northern Wind and the domain of the Tempest. To represent the other dracotaurs, make the following changes:

Western Wind. The salty western winds of Midgard’s oceans imbue these amphibious green-scaled dracotaur with the power of the sea. The dracotaur gains a 30 foot swim speed and the Hold Breath trait, allowing it to hold its breath for 1 hour if it does not use its breath weapon. Replace the dracotaur’s resistance to lightning damage with poison damage. Any action that would deal lightning damage deals poison damage, including its Lightning Breath.

2 thoughts on “Terrors of the Dragon Empire: Dracotaur”