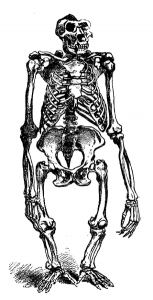 Or 30 Things to find on a Villain’s Corpse.

Wendell bent over the body of the goblin chieftain they had just slaughtered, his slender hands shifting through the goblin’s filthy goods until he encountered something shiny and hard.

“Look here, Tarquilos my old friend. The goblin chief has a little something extra for us.”

Tarquilos approached the wizard’s hunched frame and peered down at the idol held in his hands. Its gold shone eerily in the torchlight and the idol resembled some sort of nightmarish creature drawn from his worst ale dreams.

“I’m not sure taking that is such a good idea, Wendell. It might be cursed or something.”

“Nonsense, this thing has no enchantment I can discern. It does seem a bit dirty however. Let me rub it up a bit…”

Before Tarquilos could mouth a response, Wendell used his sleeve to polish the idol’s alien geometry. Suddenly, a weird buzzing vibration filled the air and somewhere in the depths below a terrible ululating cry sounded.

Wendell looked sheepishly at the warrior by his side as Tarquilos drew his sword.

PCs make a habit of killing a lot of enemies, from wicked warlords and nefarious necromancers through to majestic dragons and terrible beings conjured from other realities. Inevitably, the death of any villain leads to looting any possessions they might have, from weapons and armor to magic items and bits of information.

Often however, a villain’s possessions lack anything of real interest that entices or intrigues a PC, particularly when the villain is a faceless henchman or some other miscreant merely getting in the PCs’ way.

This list of 30 items can make a dead villain’s possessions far more interesting and can be used with The Dead Adventurer’s Catalogue to create a master list of items that GMs can fall back on.

8 thoughts on “The Dead Villain’s Catalogue”