Skip to content
Home / Delve into the Depths in the Kobold Blog / Midgard Maps: The Lady of White Rose Manor (page 3) 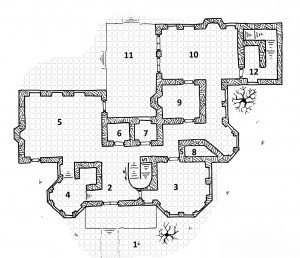 Semiopaque, leadlight windows stretch near to the ceiling on the outside wall, the panes depicting a wedge of swans alighting in a pond. Dark oaken paneling covers the interior walls. A cushioned settee and several plush chairs form a loose circle, all flanked by small oak side tables. Two wooden doors, unconcealed but skillfully set into the paneling, exit the room.

Several paintings in various stages of completion stand in front of the windows in this room. Outlines sketched on the canvas depict the vague features of a man and a woman in various standard portrait poses. The only apparent effort at painting one of the subjects consists of a hand of the man, which is painted in such meticulous detail, down to the pores, as to be grotesque.

One corner of the room opens into a smaller room which appears to be serving as an outsized coatroom.

Two cloaks hang in the cloak room. One, a red cloak embroidered with a white skull over the heart, and the second, a smaller cloak of white ermine (worth 30-50 gold pieces).

A great harp stands at one corner of the room, draped in a dusty, cloth cover. The floor, a tile mosaic depicting dancing villagers in a ring while a satyr watches from behind a nearby tree, looks ancient, though well preserved and the work of a master. The walls are unadorned. The great hearth doesn’t appear to have been used in some time.

Before the land fell into the grip of its undead masters, this hall hosted many high-spirited parties and balls; for the past 300 years, however, it has been rarely been entered except for infrequent cleaning. The mosaic floor predates the manor by a few hundred years, having been part of a temple of Yarila and Porevit, gods of harvest and fertility, among other things.

Treasure. Several of the mosaic’s tiles function as buttons, noticeable on a DC 20 Perception check. If the tiles depicting the women’s dresses are pressed in a circle counter to the direction they dance, followed by pressing the eyes of the satyr simultaneously, a 1-foot-by-2-foot section of the floor along the wall near the hearth pops open, revealing a shallow space beneath. It contains a potion of superior healing in a delicate earthenware vial and a flat, crude wooden carving of an elf maid, the opposite side of which is a scroll of freedom of movement (the spell disappears when cast as normal, but the carving may be used again to scribe new spells on). The hollow also contains a thick gold chain, the links of which appear as vines supporting a pendant in the shape of a cluster of berries composed of black pearls. The piece is worth roughly 500 gold pieces, though a wealthy devotee of the Green Gods might go as high as 800.

This room contains the odds and ends of use to household serving staff: dustpans, rags, mops, glass bottles of various cleaning fluids, wire brushes, sewing implements and small repair tools, all on shelves or haphazardly strewn about the floor.

This is the original cloakroom, though it sees no use now. It is currently used to house three angry spirits who once haunted the kitchens. When the flying cutlery became too much of a hazard even to undead guests, the spirits were herded into this room and have stayed ever since, though no one opens the door. Any who do pick the lock and open the door incur the wrath of the occupants.

Incorporeal Movement. The poltergeist can move through other creatures and objects as if they were difficult terrain. It takes 5 (1d10) force damage if it ends its turn inside an object.

Invisibility. The poltergeist is invisible.

Sunlight Sensitivity. While in sunlight, the poltergeist has disadvantage on attack rolls, as well as on Wisdom (Perception) checks that rely on sight.

Telekinetic Thrust. The poltergeist targets a creature or unattended object within 30 feet of it. A creature must be Medium or smaller to be affected by this magic, and an object can weigh up to 150 lbs.

If the target is an object that isn’t being worn or carried, the poltergeist hurls it up to 30 feet in any direction. The poltergeist can use the object as a ranged weapon, attacking one creature along the object’s path (+4 to hit) and dealing 5 (2d4) bludgeoning damage on a hit.