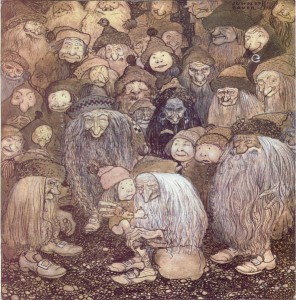 The creature before you seems to be a gnomish child yet so immaculately groomed and outlandishly dressed as to resemble a living doll. Its grin is wide and wicked.

A gnome pretender is a creature born of deep and hysterical fear—fear the likes of which only a child can know. Pretenders are fickle and powerful fey, combining a petulant disposition with a nightmarish gift for illusions.

TACTICS
Before Combat A gnome pretender usually underestimates humanoid foes, teasing and toying with them at length and then gloating as its illusory minions emerge from the shadows.

During Combat The pretender lets its “friends” do the fighting, fleeing or confusing foes with illusions and rarely brandishing its offensive abilities.

Morale A pretender’s shaky grasp of reality keeps it from recognizing danger (or even wounds) as real. As long as its “friends” are there, it feels safe. It becomes terrified and flees if they are dispelled or destroyed.

SPECIAL ABILITIES
Friends (Sp) One or more monstrosities woven from its own imagination serve every gnome pretender. Use the stats for any creature or group of creatures totaling CR 9, but treat them as if created via greater shadow conjuration (DC 22, CL 14th). They appear as grotesque yet fanciful versions of the creature in question: a giant octopus with a grinning troll’s face, for instance, or a stiffly-mannered mohrg in a finely tailored suit.

A gnome pretender’s friends have unique (invented) personalities and are completely loyal to it. A pretender may summon or dismiss friends as a standard action, but they cannot stray more than 100 ft. from the pretender. They vanish if their maker is slain.

Weightless Steps (Su) The pretender prances about as if in a dream, toes barely brushing the earth. It gains a +4 dodge bonus to AC during any round in which it moves at least 20 ft., as well as benefiting from constant jump and water walk effects.

You’re Not Real (Su) Once per day, a creature who would normally harm a pretender (whether with damage or some other effect) must immediately succeed at a Will save (DC 21). Failure indicates that the attack or effect does nothing and that the attacker suffers 2d6 Charisma damage.

Gnome pretenders are not modest with their magic; girls use disguise self to fabricate enormous dresses and outlandish hairstyles, while boys dream up all manner of princely costumes adorned with strange capes and hats. Beneath the illusions, they are dirty, ragged, and malnourished.

Pretenders are created when gnome children are subjected to unspeakable depredations at the hands of such sadistic beings as stalking bugbears or marauding ogres. Fear and desperation unleash the deepest and darkest currents of gnome magic within the child, saving its life but corrupting it forever.

Some have speculated that these nightmare children echo an older stage of gnomish existence, one which they collectively turned away from when they left the fey world.

A pretender drapes its dwelling in layer after layer of permanent illusions, transforming dank caves or musty buildings into fantastical palaces filled with fabulous colors, delicious scents, and enchanting music. Their magic can even mimic texture and flavor, spinning rivers of caramel or fields of licorice.

Gnome pretenders view other beings as playthings, but may nevertheless take a shining to disgruntled children of various races, appearing by their beds at night and luring them away. Pretenders coax these children into telling exaggerated tales of their mistreatments at the hands of adults, after which they delight in tracking the offenders down and visiting gruesome vengeance upon them. These children face utter abandonment on reaching adolescence, feared and reviled by their former kin as their old patron moves on to find younger playmates.