Skip to content
Home / Delve into the Depths in the Kobold Blog / Howling Tower: Cardtography 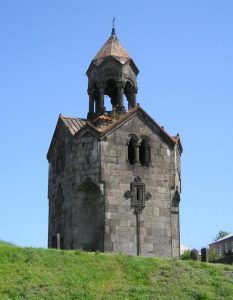 Since the introduction of computer RPGs, randomly generated dungeons are everywhere. Software developers prefer to call them procedurally generated rather than random because they aren’t truly random; they’re created according to a rigid procedure. Developing a procedure that spits out satisfying dungeons is a popular problem among programmers, and the web is full of fascinating blog posts about the many approaches people have found for solving it.

Procedures for generating dungeons randomly are, however, much older than personal computers. The first substantial paper-and-dice random dungeon generator I’m aware of is the one created by Gary Gygax and published in Volume 1, Issue 1 (Spring 1975) of Strategic Review. It was later republished with only minor changes in the original DMG. Hundreds more followed in the decades since.

The process of randomly generating a dungeon is amazing when it works well. This can be a game—or a gamelike activity, anyway—all by itself. I’d wager that most of you have spent hours creating dungeons with geomorphs, random tables, and heaps of dice just for the joy of seeing what comes out. Even the person who created the procedure can be surprised by the results despite knowing all the possibilities beforehand. The key is in the unexpected combinations and the fact that a dungeon is more than the sum of its parts.

At first glance, randomly generating a dungeon seems easier than purposely designing every aspect of it, but that’s true only if the procedure already exists. Designing a ten-room dungeon is less work than creating a system for generating an infinite number of ten-room dungeons—trust me. The savings come in bulk; if you foresee the need for an infinite number of ten-room dungeons, or even just a lot of them, then creating a system is more efficient than hand-crafting each dungeon individually.

The best of both worlds is when someone else creates the system. All you need to do is learn how to implement it.

My goal in this series of articles isn’t to put forward the ideal dungeon generator, whatever that might be. It’s not to put forward the most comprehensive, the most flexible, or the one that’s most likely to please everyone. It’s to put forward a generator that’s easy and FAST to use. One that doesn’t require a lot of materials, cross-checking pages of tables, or even drawing a map. Instead of using tables and dice, it uses a standard deck of 52 playing cards (54 when the jokers are included, which they sometimes are) and plenty of six-sided dice. One of those plastic boxes of 36 12mm dice is perfect, but any d6s will do.

This system is fast enough to use on the fly in the middle of a game session. It could be used by a solo player or by a group without a GM. When a GM is involved, it still pays to create the dungeon ahead of time and do some critical thinking about how it can be improved and made more logical (not necessarily the same thing). But if you need a dungeon NOW for a no-prep game session or to kill some time in solo exploration, this will do the trick.

The dungeons this system produces are somewhat abstract. It doesn’t actually draw corridors between rooms, for example, but only indicates that a connection of some sort exists. That connection might be a simple doorway or it might be a lengthy corridor. We’ll explore that subject more in a later article; don’t get hung up on it just yet.

This first article introduces the basic procedure for laying out the cards and for generating connections between them. Next week, we’ll delve into what’s actually in those chambers.

Start by shuffling the deck. Deal out 25 cards, face down, in the 5-by-5 pattern shown in the illustration. 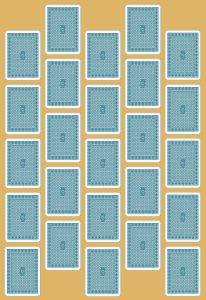 The card at the bottom center of the layout is the entrance; or, if you’re laying this out in front of players at a table, the entrance could be the middle card in the top row, where it will feel more natural to players. The illustrations assume the entrance is at the bottom, but as you’ll quickly see, any card could kick things off.

Flip the entrance card face-up to show that it’s been entered and explored.

We need to locate paths that connect the explored card to adjacent cards and lead farther into the dungeon. To do that, roll three six-sided dice.

Now imagine that the faceup card is a dial with 1 at the top, 2 at the upper right, 3 at the lower right, etc., as shown in the illustration. Place the dice you just rolled around the card in the positions that correspond to their numbers; a die that rolled 1 goes at the top, a die that rolled 2 goes at the upper right, etc. If two dice rolled the same number, return one of them to the spare dice pool. Doubles mean this room has only two exits instead of three; ignore one of those dice and return it to the spare dice pool. Triples mean it has only one exit. 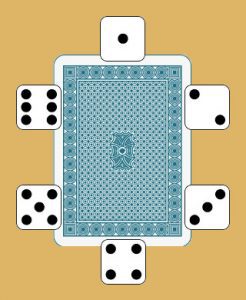 If a die turned up 4, place it at the bottom of the card to mark the entrance. If a 4 wasn’t rolled, place a spare die there anyway, as a reminder.

In our example, the first room (9 of spades) has an entrance at 4 and two other doors at 1 and 6. 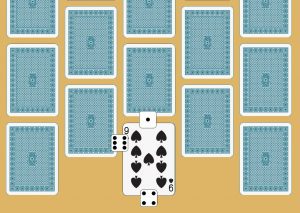 Let’s assume our explorers move through the door at 6. The card it leads to gets flipped face up (revealing the 2 of diamonds), indicating that room has been entered, and you roll three more dice to locate exits. This time, the rolls are 2, 3, 6. Placing the dice around the card to mark those locations, we see that position 3 is already occupied by the door from the first room (6). That die gets returned to the dice pool and doors are marked at positions 2 and 6, as in the illustration. 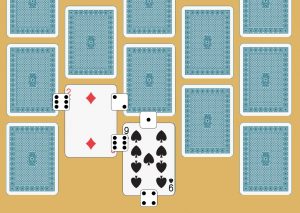 Continue in this fashion, moving from one card to the next, to map the entire dungeon. Follow these rules to answer the inevitable questions.

Using these rules to finish our example dungeon leads to the layout shown in illustration 5. 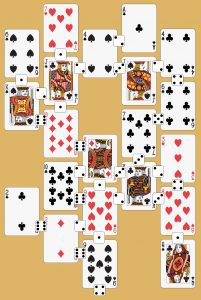 This simple layout procedure provides plenty of opportunities for variations.

Next: What’s in this dungeon?