Skip to content
Home / Delve into the Depths in the Kobold Blog / Friday Funny: A Coward’s Life (Part 1) 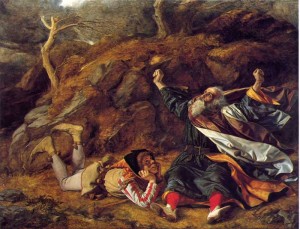 By sweet Chautauqua’s flow’ry banks
We love to sing and play,
But should we spy a foeman’s ranks,
We’d proudly run away!

There comes a time in all heroes’ lives when they must make the ultimate sacrifice and perish while saving their adventuring companions, their true loves, and sometimes even the very universe. But if everyone would play the hero and die nobly, who would live to tell the tale and reap the profits?

This article is not intended for the players who plan for their characters to go out in a blaze of blood and glory. It is intended for those who want to see their characters live and prosper through many dangerous adventures and unimaginable perils. These may not be the noblest feats in the book, and they won’t help your companions in the deadly game of dungeon crawling… but then again, in the deadly game of dungeon crawling, who cares about companions?!

So, ladies and gentlemen, to paraphrase the great poet Dylan’s words, prepare to “run, run from the dying of the light!”

Characters whose powers stem from courage and savagery (paladins, some clerics and monks, barbarians) lose these powers as soon as they take a cowardly fear. This is treated in the same way as shifting to a forbidden alignment.

Otherwise these feats are available to everyone and can be taken as fighter bonus feats.

You have mastered the technique of searching for valuables to pocket even as your allies are fighting for their lives.

Benefit This feat enables you to search an incapacitated opponent’s body for a small item of value and snatch it as a full round action that does not provoke an attack of opportunity.

Normal Ordinarily, such an action would take 2 rounds and evoke at least two attacks of opportunity.

You are adept at hiding behind the backs of your allies or innocent passersby who just happened to walk into the battle area by mistake.

Benefit At the start of your turn, if there is a creature of your size or larger within 5 ft. of you, you can transfer up to 4 points of AC from this creature to yourself and, additionally, gain a +1 cover bonus to AC for every 2 points taken from the adjacent creature. This creature counts as your human shield until the beginning of your next round.

Non-willing human shields can make opposed dexterity checks to avoid this effect, success enables them to make an attack of opportunity against you.

This bonus does not stack with any bonuses to AC gained from cover.

Normal Ordinarily, you can only gain a cover bonus to AC from willing characters standing between you and the attacker.

You have mastered the art of having friends and non-combatants take shots aimed at you. As long as you have friends around you, you are protected.

Benefit Once per round, when you take damage from a melee or ranged attack, you can have an adjacent human shield take the damage instead. The creature can make a Reflex save (DC 15) to take half damage.

You’re an expert in running away from the battlefield, leaving your friends and enemies alike stunned with the rapidity of your sudden retreat.

Benefit While moving away from an enemy, you gain a +2 dodge bonus to your AC and move six times your normal speed for the first round of your escape (if wearing medium, light, or no armor and carrying no more than a medium load) or five times your speed (if wearing heavy armor or carrying a heavy load).

To use this feat you must drop all Medium or larger items held in your hands.

Live to Tell the Tale [Cowardly]

In your desire to save yourself, you gain almost supernatural speed and resistance. In a shameful display of cowardly hysteria, you flee screaming from the battlefield pushing friends and foes alike into harms way.

Benefit You can fly into a mindless hysteria once per 5 levels per day. You scream wildly that all is lost and “we’re all gonna die,” throw away any items that might hinder your escape, and flee the battle, discouraging your allies and encouraging your enemies.

During the hysteria, you gain phenomenal agility and durability but become almost mad with fear, losing your ability to do anything except running away. Whenever possible, you use both Improved Run and Improved Human Shield.

Such a display of cowardice and despair is extremely disheartening to your allies. Any friendly combatant who witness your escape must succeed on DC 14 Will save or suffer a -1 morale penalty on all rolls for the duration of the encounter. Penalties induced by multiple hysterias do not stack.

You temporarily gain a +4 bonus to Dexterity, a +4 bonus to Constitution and a +2 morale bonus on AC and all saving throws, but you lose the ability to attack any hostile creatures. The increase in Constitution is treated the same way as that gained from a barbarian’s rage.

While panicking, you cannot use any skills, abilities, spells, or magic items that do not directly assist your escape. You cannot carry any items larger than Small.

A fit of hysteria lasts for a number of rounds equal to 3 + your (newly improved) Constitution modifier and cannot be prematurely ended. At the end of your hysteria, you lose the hysteria modifiers and restrictions and become fatigued (-2 penalty to Strength, -2 penalty to Dexterity, and can’t charge or run) for the duration of the current encounter.

Your appearance and behavior suggest a miserable creature not worthy of killing, too weak to enslave and too sickly to devour. This often gives you an edge when negotiating your surrender or punishment or when bargaining from a position of absolute powerlessness.

Benefit You get a +2 on all Charisma-based skill checks made to avoid being hurt by an opponent. This bonus rises to +4 if you have lost half or more your hp or allies.

Special This bonus does not stack with Persuasive and Negotiator.

I prefer to call it survival. I’ll be behind that post down there if you need me.