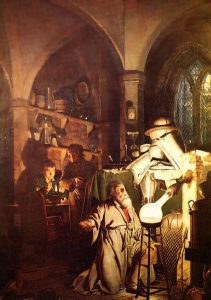 Not all healers are tied to a church; in some places there are surgeons, hospitalers, and village elders. The most refined healer not associated with a deity is the chemist. Combining superior alchemical knowledge with medical research, the chemist can create compounds, tinctures, salves, and extracts of vast power. The adventuring chemist adds arcane lore to healing skills and his or her potions can harm enemies as well as heal friends.

The chemist is compatible with either Swords & Wizardry or Labyrinth Lord core rules.

Attack and Save Rolls: As cleric

Shield and Armor Restrictions: None

Weapon Restrictions: Any 1-handed weapon. No missile weapons other than elixirs.

POTIONS A chemist can prepare a certain number of potions per day. When the chemist ingests these potions, he or she gains the power of the equivalent spell of the same name for one day. The chemist’s level acts as the equivalent caster level for the potion’s effects. If created but unused, the potion retains its effect indefinitely. The chemist cannot ingest more potions than he or she can create per day. It takes 1 hour to prepare the necessary compounds for each potion (to a maximum of 8 hours), and the chemist must be able to concentrate for this period of time with no distractions. He or she must also have access to a chemist’s kit to prepare any potions.

The chemist is also adept at identifying potions and has a 50 percent + chemist class level chance of identifying a potion he or she did not create.

MAGIC ITEMS
A chemist can use any scroll, staff, or wand available to a cleric or magic-user with a success rate of 50 percent + chemist class level. If the chemist fails this roll, the item fails to work and its use/charge is lost forever.

CHEMIST’S KIT
A chemist’s kit is a small, hardwood box that contains 50 empty potion and elixir vials and enough medical and alchemical components to make a total of 50 potions or elixirs. If the chemist attempts to create more potions or elixirs than is in his or her daily allotment, this represents a rush job. The chemist must make a save vs. spells at a –3 penalty for each additional potion or elixir, or the entire kit will explode, causing 6d6 damage within a 20-ft. radius. A chemist’s kit costs 2,000 gp. Fifty replacement vials costs 20 gp.

REACHING 9TH LEVEL
Upon reaching 9th level, a chemist can create new potions. The rules for potion creation are the same as creating magic items.

9 thoughts on “The Chemist”