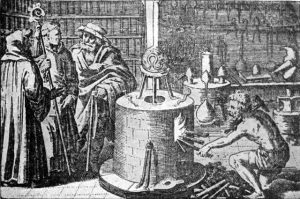 Alchemists, craftsmen, and madmen with flasks have been known to make interesting discoveries with chemicals. This has not gone unnoticed by adventurers, monster hunters, and other generally crafty buggers. A few creative adventurers — the kind who can find an alternative use for some oddly glowing goo — have been adopted these items. Some adventurers may scoff at the gnome who refuses to delve underground without two bars of soap, a flask of deer musk, and beef jerky treated with a bowel gas preventative. But while they scoff, such a gnome is ready for whatever may assail him or, indeed, his bowels…

Etching fluid was originally discovered by an alchemist attempting to create a portable forge, using chemicals to heat the metal. The experiment was a failure and the chemicals could not heat the materials to forging temperatures. However, the etching fluid made the metal malleable enough to etch or engrave—hence the name. Some foresighted monster hunters and adventurers carry the fluid to heat their weapons or at least leave permanent messages on metallic surfaces.

Etching fluid is two separate vials: one of powder, one of a liquid. When mixed on any metallic surface, it has the same effect as the heat metal spell over 7 rounds. Etching fluid is impossible to apply to armor during combat and applying the fluid to a melee weapon provokes an attack of opportunity. Applying the fluid to metallic ammunition ruins the flight of the projectile.

If used on a metallic surface to etch a message, an appropriate tool is required, often sold with the fluid. The message sets after the 7 rounds. The Craft skill can improve the appearance of the etching. When mixed and not applied or removed from the vials, the fluid loses potency after 10 mins. One measure will coat a single melee weapon or etch a message in a 5-ft. metal square.

One particularly strange perfumer was the discoverer of gas bombs. Instead of disposing of a foul-smelling accidental batch of perfume, he sold the formula to aristocrats as a practical joke.

You can throw this ceramic flask as a ranged touch attack (range increment of 20 ft.). When it strikes, it creates a horrid smell. The creature is sickened for 1 hour or until washed with a strong soap (Fortitude DC 15).

Even if the save is made, the creature is obvious to those with the scent ability: they gain a +10 bonus to Survival checks when tracking such stinking individuals. Domestic cats within 1 mile find the smell irresistible and follow affected creatures, meowing loudly and happily until frightened away.

A tanner attempting to run his competitors out of business created this substance. He planned to toss the blight into his rivals’ vats, ruining any leather made in them. However, he ruined his own vats by mistake and sold the formula to pay his debtors.

This sticky greyish paste comes in rolled wax paper and may be applied or slapped onto a leather item with a touch attack, provoking an attack of opportunity. The blight may not be used as a thrown item as it sticks to any container. The blight’s target object takes half its maximum hp in damage and gains the broken condition; the object takes no further damage.

7 thoughts on “Industrial Chemicals for Adventuring”