Skip to content
Home / Delve into the Depths in the Kobold Blog / Swords of Hell: Items from Dante’s Inferno 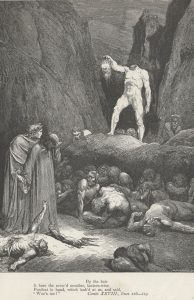 Dante Alighieri cited various magic items in his masterwork opera Divine Comedy. In this article, 5E stats for two powerful swords appearing in the first part of the epic poem, Inferno, are provided.

The Sword of Homer

Weapon (shortsword), very rare (requires attunement by a character with a Charisma score equal to or greater than 12)

“The good Master began to say, ‘Look at him with that sword in hand who cometh before the three, even as lord. He is Homer, the sovereign poet…”

Dante puts the greatest poets of the past in a special section of hell with no suffering because they were capable and just in life, but for obvious chronological reasons, not faithful Christians. Among them we can find Homer, author of the Iliad and the Odyssey, wielding a sword as symbol of power and authority over other deceased bards.

This weapon has a simple grip made of olive wood and a brilliant bronze blade inlaid with electrum. Its curved guard resembles an ancient Greek harp.

You gain a +2 bonus to attack and damage rolls made with this magic weapon. The sword has also the Harmonious special feature, so attuning to it takes only 1 minute. It has the following additional properties.

Poetic Inspiration. You can inspire others through stirring words. To do so, you use a bonus action on your turn to choose one creature other than yourself within 60 feet of you who can hear you. That creature gains one Poetic Inspiration die, a d4.

You can use this feature one time per day. You regain the expended use when you finish a long rest.

Weapon (longsword), very rare (requires attunement by a character of any evil alignment)

“A devil is here behind, that adjusts us so cruelly, putting again to the edge of the sword each of this crew, when we have turned the doleful road, because the wounds are closed up ere one passes again before him…”

This sword is used by devils of the Eighth Circle for punishing sowers of discord and schism, painfully severing their limbs in the grim scenery of the pit.

This weapon has a horned grip made of white human bone and a razor-sharp blade spattered with blood.

You gain a +1 bonus to attack and damage rolls made with this magic weapon. The sword has also the Wicked special feature, so when you are presented with an opportunity to act in a selfish or malevolent way, the item heightens your urge to do so. It has the following additional property.

Butcher. When you attack a creature with this weapon and roll a 20 on the attack roll, you lop off one of the target’s limbs, with the effect of such loss determined by the GM. If the creature has no limb to sever, you lop off a portion of its body instead.